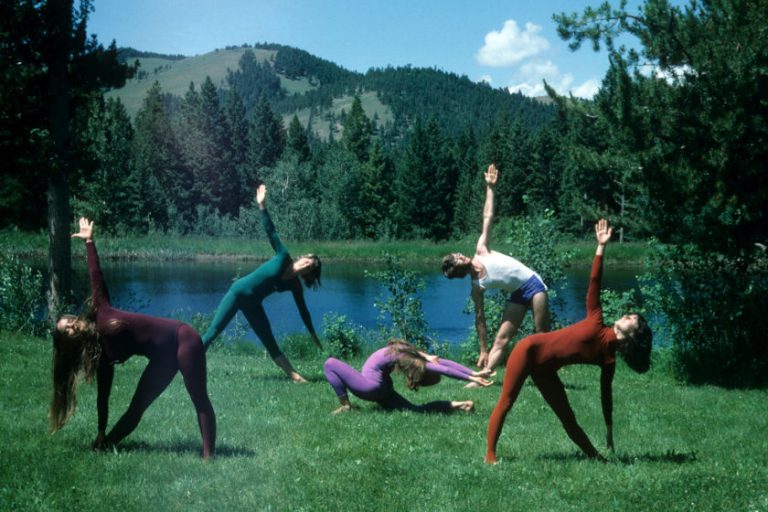 Summer of ’75: Our Beginning 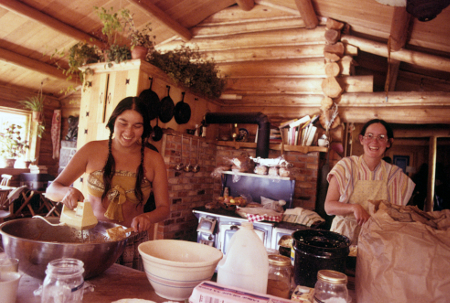 Today I want to talk about our humble beginnings in 1975. We started the summer with just the group of us, Laughing Water, Tom Ryan, Heidi Goldman, William Staniger (later Golden), Janice Paulsen and myself who had big ideas, little money and no work. We were later joined by Jeannette Herman who came over from Billings and added astrology to the list of our offerings. Of course we didn’t know we couldn’t do it so we started promotion. The 1975 summer was basically us teaching whatever we knew. We had photography workshops with our neighbor Tom McBride. As well, we had “Basic Yoga and other Nice Things, Like a Flower Opening” with Laughing Water, and Heidi Goldman and myself taught what little we knew.

Heidi, of course, was teaching Hatha Yoga which she actually had experience in. I taught foot massage and spiritual teachings – can you imagine? Laughing Water‘s bio read so confidently “has combined an impressive academic background with long experience in personal growth” – we were all under 30! Mine went on to rave about my limited work in massage therapy, time at the cancer clinic and years spent with spiritual teachers in India. Heidi was actually an experienced yoga teacher who also studied physical therapy, nutrition and healing. We were confident and knew all – I only wish I knew now what I knew then. 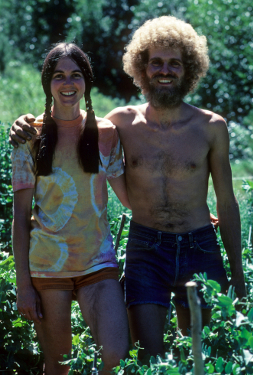 The cost for one week was $100 and it include a campsite – bring your own tent, natural vegetarian food and instruction. There was also a $25 non-refundable deposit. These homemade workshops were some of the best we ever produced because our enthusiasm and love of the ranch were so great, and our hearts were so open to change. We billed these workshops as “ancient and modern techniques for creating health and well-being.” What a way to start.

Later that summer we had a workshop called “The Laid Back Ladies Workshop” which was a group of 8 or 10 with yoga taught by a friend who happened to drop in, Shri Raman.

Since we weren’t a non-profit yet we operated under the auspice of the New Dimensions Foundation which to this day produces New Dimensions Radio heard across the country on NPR. We started as the Holistic Life Foundation which would later become the Feathered Pipe Foundation,  and the under the direction of Dr. Frederic Leboyer, had an educator’s program called Holistic Childbirth Education in the Bay Area. Leboyer was a gynecologist graduated from the School of Medicine, University of Paris. He was the first to promote birthing without violence, massage for babies and more. I will write a separate posting about him later. William Staniger, our then president of the board, had befriended Dr. Leboyer in France so when he came to the US, William escorted him. 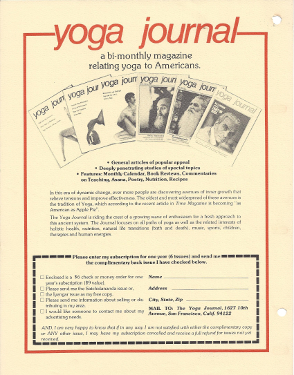 In that year, our core group which as well included William “Golden” Staniger, Judith Hanson Lasater, Rose Garfinkle, Rama Jyoti, Jean Giradot established the California Yoga Teachers Association (CYTA) and the Institute for Yoga Teacher Education (IYTE). We began to be publish the Yoga Journal under the auspice of CYTA (California Yoga Teacher’s Association). Lilias Folan was on the board of advisers for the Holistic Life Foundation, Judith Lasater taught and Suzanne Armes the pioneering filmmaker who made “Five Women, Five Births” was also on our faculty.

In August we had a yoga workshop with Judith Lasater, Felicity Hall, and Paul and Linda Copeland.  It was a 3 week workshop and Laughing Water cooked for it.  We had so much fun that we decided to do more. This is the workshop that I talk about often where no one stayed in the Main Lodge and everyone camped out.  The coolest person was the one who stayed the farthest away.  Felicity had her campsite all the way up at Sky Farm in Magic Meadow.  Laughing Water was on the very top of the hill.  Every night we played games of trying to find our campsites without flashlights.  Even though those were the long days of summer where it stays light in the Northern Rockies until almost midnight, we stayed up so late that it was very dark by the time we tried getting back to our tents.

This, my friends, was our humble beginning.