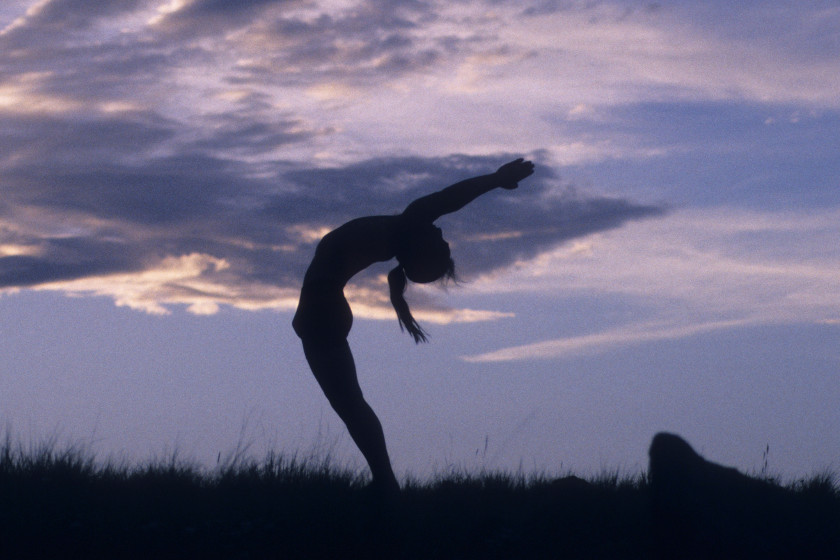 John Schumacher: A Lifetime of Yoga and Self-Discovery

John Schumacher is a certified Advanced Iyengar Yoga Teacher—one of only 14 in the country—and founder and director of Unity Woods Yoga Center, the largest Iyengar Yoga Center in the U.S. The Feathered Pipe was honored to host John along with Patricia Walden for a week-long retreat that became an annual reunion-like gathering of Iyengar yogis and yoginis for nearly 20 years. Here, John reflects on his journey with BKS Iyengar, memories of teaching at the Feathered Pipe Ranch and the aspects of yoga and a lifetime of self-discovery.

Today I’d like to start by simply asking, “How are you doing right now, in this moment?” 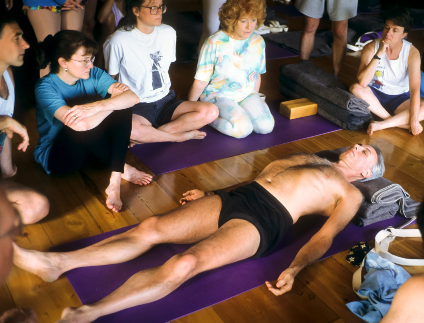 Things are interesting right now. My studios are closed—or rather, in limbo—but our teachers are still running a full schedule of classes online, which has been a big adjustment for everyone. Because we’re online, and because I’ve traveled and taught for years all over the world, we are getting a lot of students who would never get to take in-person classes in the studios. People tuning in to class from the West Coast, from down South, from South America—from all over—and the classes are actually about twice as large as they used to be. So, that part is wonderful.

I just sent a birthday card to my dear friend Tara Brach, a meditation teacher in Bethesda, MD, and one of the things I said to her was how we’re so fortunate to have had our practices all these years, to prepare us for this particular moment. Especially now when there’s such worry and instability, I’m so grateful for many years practice and tools to get us through. I’ve taught for so long, it’s interesting how so much has changed over the years, but the practice always provides.

I can imagine many things in the world have changed throughout your 40 years of yoga. Tell me about how you began teaching.

Well, I was 25 years old or so, and I was looking for what was important in life. I had come from a fairly well-to-do family and saw that it wasn’t a particularly happy family, so I was recognizing that material well-being didn’t necessarily mean emotional, psychological or physical well-being. It occurred to me that it really mattered where I placed my value, my energy and my attention. In this search, I figured health was a good place to start because if you had all that stuff and you felt miserable, you couldn’t even enjoy it.

I started exercising and cleaning up my diet, and somebody had given me a copy of The Complete Illustrated Book of Yoga, so in 1970, I began doing asana and made a commitment to spend one hour a day taking care of myself. Over time, I became stronger and more flexible and really saw the benefits of all the practices that I was doing. As far as jobs go, I was a musician—writing music and playing drums, flute and piano—and supplementing that small paycheck with art modeling, making $4/hour as a model. When a mutual friend said that he knew a guy looking for a yoga teacher for the Montgomery County Department of Recreation for $8/hour, I jumped at the opportunity.

Long story short, this guy came out to watch me practice and give me lessons two or three times. He gave me a curriculum to teach that fall, and that was where I began! Of course, it’s horrifying to think that I became a yoga teacher after three lessons with this one guy—this is the sort of thing I rail against these days—but that’s where yoga began for me and there weren’t institutions and trainings like there are now. I walked into my first yoga class in the fall of 1973, and there were around 30 students ready to follow instructions.

Who did you study with once you got deeper into teaching? 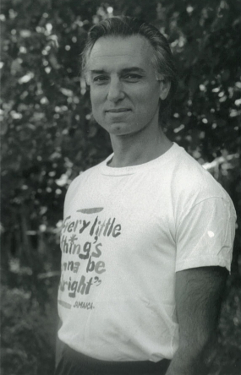 Once I was in the front of the class, I quickly realized how much more there was to learn, so I started doing occasional workshops in different cities and taking classes here and there. Somebody gave me BKS Iyengar’s book Light on Yoga, which was much different than the previous books I’d read, and I practiced and taught from that text for the next five years. I also heard about a yoga workshop in Cambridge, Massachusetts with senior Iyengar teacher Victor Van Kooten. Cambridge was really the only Iyengar community on the East Coast back then, so I went up there for two weeks in the summer of 1980—and it blew me away.

I respected Victor because not only was he was an amazing practitioner and teacher, he was a wonderful person. He had a fabulous sense of humor. He was compassionate. He worked with the people in the class. Before then, I actually had not been very interested in going to see Iyengar, who was referred to as the “Lion of Pune” because of his ferocity. But seeing Victor and experiencing him as a person, I thought, “There’s much more going on here than what I’m reading in Yoga Journal and various other publications.”

This was just toward the end of the days when you could simply write a letter to Iyengar and he would write back to you. So I wrote to him, and he said, “Come in January 1981 for a three-week intensive.”

What do you remember about that first trip to study with Iyengar in India?

It was a tumultuous experience, to say the least. Mr. Iyengar was—still is, in my mind—a force to be reckoned with. I went through all sorts of physical and emotional upheaval and learned a tremendous amount. I’d wake up in the morning, dreading the class because it was so intense—he would holler and slap and carry on. Then in the evenings, I felt so wonderful from the yoga and sitting on my hotel roof, the sun setting and parrots flying over. Each night, I felt ready to spend the rest of my life in India. Then I would wake up in the morning and scratch another day off the wall like a prisoner.

It was an utter roller coaster, and I went home thinking that the intensive would look great on my resume, but that I never have to do this again. The yoga began to do its work though. When I returned, my entire practice had changed based on what I had learned, which meant that my teaching changed. Not everybody liked it, and about half of my students left. Others became more interested because it was more dynamic, challenging and stimulating than it had been previously.

My classes grew and around six months later, I found myself writing a letter to Mr. Iyengar, asking to come back to India again. I realized that the first intensive had shown me two things: First, that I had only begun to scratch the surface of teaching and instruction. And second, I know that yoga is about self-discovery and exploration, and up until then I had been a very calm guy. I was very intrigued by this practice and this teacher who turned me into an emotional basketcase. I had to know what that was all about!

Now, one of the things that I see from a teacher’s point of view is that there are students who listen to what you have to say, work hard at what you give them then come back for more. This is this is why I teach, and I think it’s why any teacher teaches. I was that kind of student when I went back a year and a half later—Mr. Iyengar could see that I had worked hard on what he had taught me, and I had come back ready to continue learning and growing. That year, he treated me entirely differently, and from that time on, we had a close teacher-student relationship, me returning every year for 30 years to study and spend time in Pune.

What is it about the Iyengar lineage that has captivated you for almost four decades? 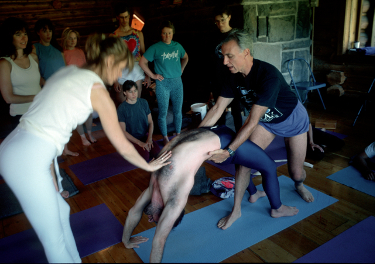 As people go through changes in their lives, we look for different things. The Iyengar approach to yoga is so vast and so deep that whatever stage I’m in in my life, there’s something there for me. Mr. Iyengar was so creative—I don’t think he ever taught the same class twice—so there was always something new and stimulating to explore and experience. I no longer practiced or taught straight from a syllabus, but instead, really began to explore what’s going on here. The quality of exploration might change over time, but the magic of what’s happening never ends.

The idea in yoga is to become aware enough, tuned-in enough and quiet enough to see what your real nature is. There are many ways to get there. What I’m fascinated by now is the relationship between the breath and consciousness, how they interweave and affect one another. I will always remain a student of the practice, and I think it’s important to continue learning not only from your self-practice but from other teachers.

When I first started teaching at the Feathered Pipe Ranch, I was co-teaching with Judith Hanson Lasater, and learned so much from her. Then I began partnering with Patricia Walden for workshops and we worked really well together—so well that we co-taught at the Ranch for 19 years! I’d go to her morning sessions and situate myself in that nook in the back corner so I could listen to her cues and the way she taught, and she’d come to my classes and practice with the group. It was a great privilege to have that time together, learning and growing and knowing each other as friends.

What other memories arise when you think about the Ranch? 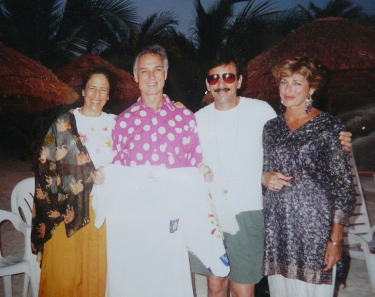 The beauty of the Ranch, the nature and the quietness of that part of the world there in the mountains—it’s such a palpable feeling. The fabulous wooden hot tub. All of the fun art on the refrigerator. The food! I think some people went to the Ranch just for the food. I’m sure you’ve heard my claim to fame: Asking the Ranch to include in my contract that I wanted chocolate chip cookies every day after lunch during my workshop week. Of course it was a big joke, but the kitchen staff made it happen and every year they were delicious!

The Ranch is only made possible by the people. Being around India, Howard and all of the hippies that were older than me, made me feel very welcome. I was a young hippie myself who had long hair and had lived in a school bus and small cabins in the woods, so the accommodations and land were familiar. I cherished visiting with India at her Lake Cabin, oftentimes with other family members, long time acquaintances, and wandering sadhus hanging around. Sometimes it was just India and I, and the conversations included Ranch business issues (which were never-ending); local, national, and international gossip; and fascinating and illuminating spiritual discussions.

Her words could be informative, intriguing, incomprehensible, funny, stimulating—an endless range of adjectives. India was as bhakti as you can get, and because of that, things just worked out for her. Certainly, she had many serious struggles and setbacks, but like her coming to own the Ranch, good stuff just came her way. And even more than good stuff, lots of love came her way. As a couple of really good song writers once said, “And in the end, the love you take is equal to the love you make.” India’s life affirmed the truth of those words—and I’m honored to have been a part of what she created with that love with the Feathered Pipe.

*Special thanks to freelance writer Andy Vantrease for doing this interview!