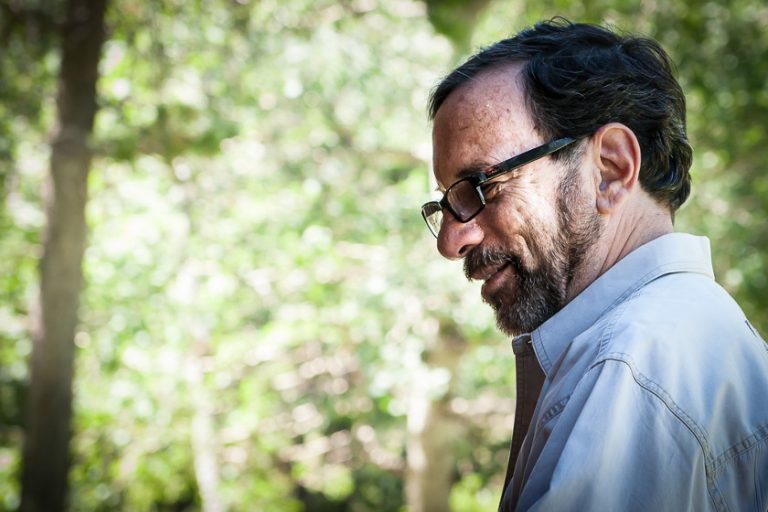 In July 2019, Amy Stephan and Andy Vantrease sat down with longtime ranch manager Howard Levin in his one bedroom cabin, just past the Lake Tipi on the Feathered Pipe Ranch in Helena, Montana. After quieting the Hindi tunes and shifting seats—away from the armchair that “wasn’t for sitting”—the questions begin. Here, Howard opens up about the past 50 years of travel, devotion and service.

What brought you to the Feathered Pipe?

Delta Airlines. Well, the first time was my mother’s Pontiac. 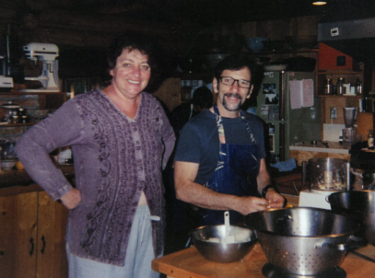 I was the manager at the Ranch for 20-something years, and I’m very old friends with India Supera. We met when we were 21 years old in 1968 on the Greek-Turkish border when we were both backpacking hippies. After she started the Feathered Pipe, I would come visit in the summers, between projects as an interior designer in New York and San Francisco. Then I was involved in setting up the planetarium for Sathya Sai Baba’s college in South India, and when that project was finished, I though it’d be a good time to take a break from interior design and do something different.

I was at the Ranch in the summer 1987, and I took a hike with the manager at the time, Kelly Wiseman, who told me he was leaving to manage the food co-op in Bozeman. So we went down the hill, and I said to India, “Maybe I’ll manage the ranch for a few years.” That turned into more than two decades of working here.

In 1993, I had a cabin built on the property, so I was able to live here when I worked and now I come back every retreat season as one of the resident “gummers” (an old-timer). I even have squatter’s rights because I was on the property more than five years with no (legal) complaints!

The infrastructure was simpler: We didn’t have a dining hall or teacher’s cabin and the downstairs of the chalet was a garage instead of rooms like there are now. When I first came, each room had bunk beds, and guests were six people to a room. Private options were the tents or the tipis. It was yoga camp for adults, and everyone had a great time.

Yoga workshops were mostly Iyengar yoga in those days, and we had retreats on shamanism with Brant Secunda, massage training, Native American flute, Jean Shinoda Bolen with women’s retreats, and Dr. Andrew Weil and Dr. Bernard Jensen on nutrition and health.

How did you meet India on the Greek-Turkish border? 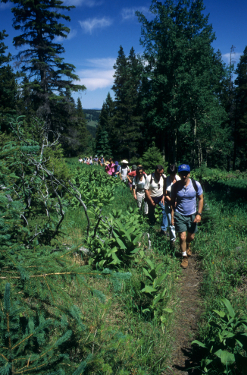 Well, I had been hitchhiking through the south of France and when you’re a hippie with long hair, it wasn’t easy traveling because the Europeans hated our guts. So, I tied my hair back, and I had my dad’s navy peacoat with a big collar. In Florence, I ran into some hippies with a Volkswagen bus, and I got a ride with them through what was then Yugoslavia, and on into Greece. We donated blood in Greece for $50 and got to the Greek- Turkish border.

When I went into the customs house early in the morning, India was sitting on the counter, with no staff to be found. She was with her friends Ruthie and Lila and a couple guys from France and Italy. She jumped down and said, “Hi, I’m India Supera. What’s your name?” I said, “Hi, I’m Howard.” She told us that she was going to Instanbul and asked us to join. There was a famous hippie hotel called the Gülhane Hotel, and we fit probably 12 of us all in one room. We made so much noise that they kicked us out and we were wandering the streets of Instanbul looking for another hotel, which we found—and we had a really good time in the process.

Very quickly, I learned that India was special—she was always taking care of somebody or helping somebody. She was circumnavigating the stupa to pray for Dennis because Dennis lost his money and passport, or she was cooking for someone who was sick. India was so charismatic and serious about serving others. I just did whatever she did.

One time we were all in Goa, and India said she was going on a spiritual pilgrimage because she felt like her spiritual teacher was in South India. When Lila and I offered to go with her, she said, “No, no you guys just want to party on the beach, you’re not ready for an official pilgrimage. I’m going by myself.” She got her pack, and started walking down the beach—so we just followed her and went with her. We didn’t care that she’d said no.

We had years of adventures in that time period, and we separated a few times but I’d always run into her again months later—either in Kathmandu, Goa or New Delhi—and pickup where we left off.

Were you also looking for enlightenment in your travels?

It’s hard to remember what I was looking for when I was 21, but I think I was looking for a place to be accepted for who I was—with my long hair and bell-bottoms. I wanted to find someplace where I could be myself and nobody would harass me.

We were the first wave of young travelers to go to India, so everyone was very curious and hospitable. We rode lories, which were big trucks with mattresses on the roof, so at night we’d lie down and watch the trees and the moonlight. The drivers would stop and buy us dinner and wouldn’t charge us anything—we were their guests. On that same spiritual pilgrimage with India, we stayed only in Hindu temples—she set a strict no-hotel rule­—and the locals were shocked to see us. They had never seen westerners staying in a Hindu temple. Remember, this was only 20 years after the British left.

Everywhere we walked, every single car stopped and offered us rides. I hitchhiked all over India in those days and experienced nothing but generosity, hospitality, kindness and love. The Indian people took us home, fed us, stuffed us. I’ve never experienced anything like that anywhere else—and I’ve been to 36 countries.

You never ran into any trouble? 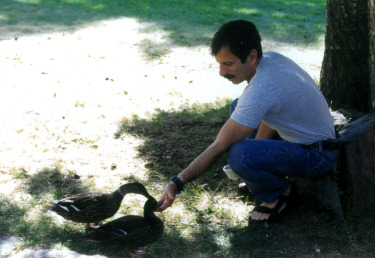 I had all my money stolen a few times, but whenever I was broke, I was always upgraded from my previous standard of living! One night, we were partying with something that had come in the mail from San Francisco—where else?—and when I went back to my room, which had beautiful views of the Pagoda and terraced rice patties and snowy peaks—the money that I had stuffed under my mattress was gone.

The next day, I was completely broke, but I got my passport and went to the Blue Tibetan Café, where a couple invited me to their table. She was a film editor and he was a bestselling author from Grove Press. She said I reminded her of her brother, who was killed in Vietnam, and we found out we were both from New York with Jewish backgrounds. So they said, “Don’t worry, we have a big house in the embassy row, just come stay with us.” They were staying with Chris Jagger, the younger brother of Mick Jagger, and a Polish man named Stanislaw Radzirill, who later married Jackie Kennedy’s sister. So, I stayed with these people, went to the best restaurants, went around in taxis for the rest of the summer, and they took care of everything.

My life seems to happen that way, actually. Each event flows into the next—and here I am!

Did you ever have a vision for your life or did you leave it up to trust?

When I was a kid, my mother was bipolar, and in the 50s there was no medicine for that kind of thing. When she was on the negative side, she was very verbally abusive, and when she was on the positive side, she was the best mother in the world, taking us to the theater and opera. It was an unstable and scary childhood, and all I could think was that some day I’m going to get out of here. Those circumstances certainly sparked my wanderlust.

I did get out of New York and went to school for architecture; then I got caught up in the hippie thing and turned towards spirituality. When I went to India, a lot happened and I met tons of people, one of whom gave me a job in interior design, where I got to use school training. Later, a short walk with Kelly landed me my job at the Feathered Pipe.

Besides “seeing the world,” I didn’t really have a grand plan. I learned along the way, and things just always fell into place. I didn’t think too much about it.

What are some lessons from your travels, friendships and experiences that shaped who you are today at 72 years old? 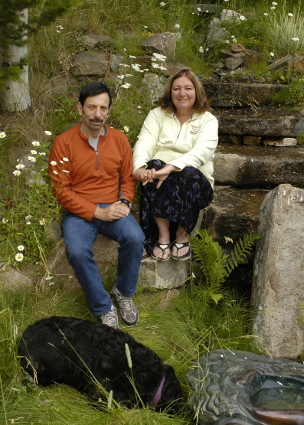 Sai Baba taught us to live in love, and to love all, serve all. He’d say, “The secret to a happy life is not in doing what you like, but in liking what you have to do.” So the emphasis is on service.

India and I both used the mantra: “We’re not servants. We’re here to serve.” That’s the attitude we’ve always had towards the guests of Feathered Pipe. We wanted people to come in and feel like they’re visiting a family—because you are. You’re plugging into our family, which operates whether guests are here or not. The Ranch is our lives. And the energy of Feathered Pipe is contained because we’re in a private little valley that’s been spiritually-oriented, yoga-oriented and consciousness-oriented for 45 years. That energy builds up, and people feel it.

You know, after a lifetime of experiences, I realize that all humanity wants the same thing. Sure, Americans might be divided on issues like abortion and gay marriage, with some thinking it’s right and others thinking it’s wrong, but all of us want housing, education, healthcare, decent paying jobs, clean water, fresh air. We love our children and pets and want them to have a future. Those things are universal throughout the world, and I don’t see the big division between people.

Greed and ego get in the way of taking care of each other, and I’m grateful to have people in my life who remind me why we’re here.