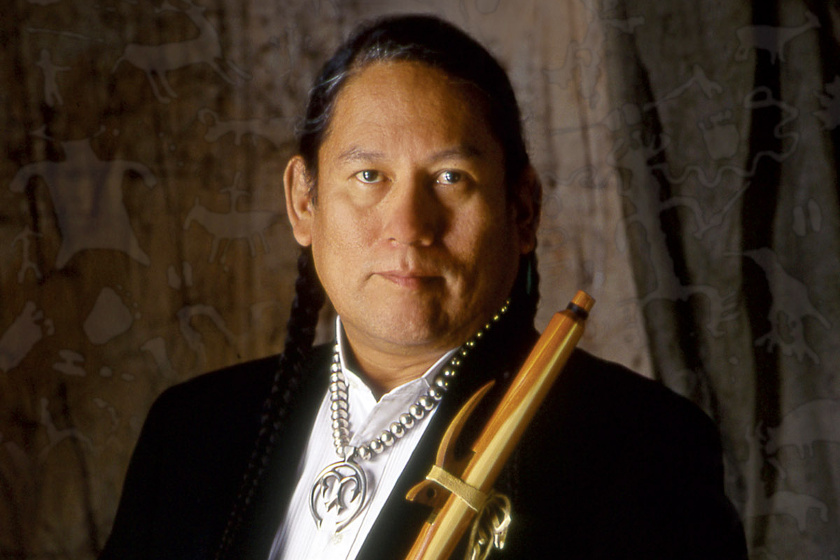 Feathered Pipe’s dear friend R. Carlos Nakai is the world’s premier performer of the Native American flute. He has released more than 50 albums in his career, including “Canyon Trilogy“, which sold over 1 million units. Here, R. Carlos speaks with Andy Vantrease about music as a form of self-expression, sharing art as a catalyst for personal growth, and how teaching at the Feathered Pipe Ranch informed his life’s direction and mission.

RC, tell me about your musical background and how you began your work with the Native American Flute? 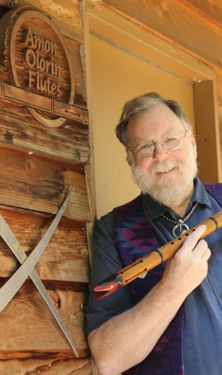 I was originally trained in classical trumpet and music theory, and I was given a traditional cedar wood flute as a gift in the late 1970’s. While researching the history of the instrument and learning to play, I found that there was no gold standard—the technique varied from one instrument to the next and one group of tribal people to the next. I learned that a number of pipe organ flute pipe makers came to North America in the 1700s—from England, Scotland, Austria and other European countries—and introduced these instruments to the natives, who then began making their own. Tribally and personally, the flute is a sound sculpture, each tribal maker putting his own twist on it. I’d interview native people and they’d say, “Oh yeah, my grandfather had one of those,” but they didn’t know how it was made or how their elders gained the knowledge to play melodies on the instrument.

Then I interviewed some of the traditional flute players and they said, “All we do is play our vocal music on these instruments. We tell our stories.” And that’s when things started falling together. I wanted to bring this instrument back into the real world, and help people use it to expound on what they know about themselves as carriers of many traditions. After all, Americans are a mixture of many different heritages, so this could be a tool of personal expression.

In 1987, I met Ken Light at a Harmonic Convergence event in Grand Junction, CO. Ken was one of three flute makers in the world crafting modern instruments tuned to A440. We developed a friendship, and I asked him to make some traditionally tuned flutes for me. We discussed how to bring these teachings to a wider audience and decided to organize flute workshops together.

Ken lives in Arlee, Montana on the Flathead Reservation, so he found the nearby Feathered Pipe Ranch as a potential venue, and we approached India about doing a flute workshop. It’s hard to believe: We held our first Renaissance of the Native American Flute (RNAF) workshop in 1992.

What was the structure and shape of the first few workshops? 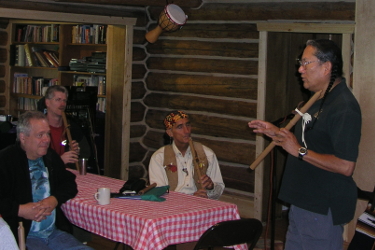 By that time, I was certain that I wanted to open the workshop to anyone who was interested—not just seasoned or trained musicians. The first year, we had 25 people from all backgrounds and walks of life in attendance.

India was hesitant at the beginning because they had never done this kind of workshop at the Ranch. They specialized in yoga, bodywork, intellectual topics, massage, spirituality—how would this fit? So, I decided to add a spiritual component, since I do that in my personal life anyway. I knew I could teach about American Indian culture and the discipline of western European music techniques, native plants and our relationship to the Earth. I led our first RNAF sweat lodge ceremony to connect us with the flute spirits and each other.

India loved these ideas, and every year that we returned, she was interested in what we’d do next. We invited herbalists and people who worked with native medicine. We invited a mycologist from Missoula, who talked about renewal and the mycological miracles of reviving Earth that had been used for parking lots and landfills. India led people on forest bathing hikes through Colorado Gulch and taught them what she knew about the land and introduced philosophies from other teachers who visited the Ranch.

At the core of the workshops was the flute, but it became so much more than learning to play an instrument. We took a deeper dive into music as a medium for self-expression, and the importance of how we relate to our world-at-large, the Earth, and the cosmos. We were offering students various ways to develop personal philosophy within a world of others, to feel good about themselves and why they were there—and that changed everything. India used to say that Ken and I were masters of psychology and transformation, not music teachers.

How did those transformations play out among your students? 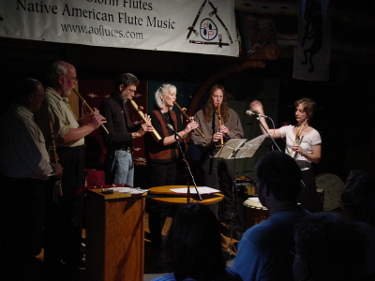 Most people didn’t have formal musical backgrounds, but right away, we gave them tools to begin working with their instruments. We started with the breath and stretching the body. It had nothing to do with reading music but learning to “sing one’s innate song.” We encouraged them to make sounds—any sounds—to get comfortable hearing their particular expression through the flute. Using my 1996 ‘Art of the Native American Flute’ manual as a foundation, I taught the basics of how to write songs using finger position and made the classes widely accessible and experimental.

There’s this whole thing about needing to be well trained to make good music. What about my own music? What about what I want to say? People with degrees in music performance had problems with my teaching because they said I was giving away the secrets that it took them eight years to acquire. To me, music isn’t limited to any select group of people: Children sing all the time. Birds sing all the time. Every being makes its own music. It’s personal expression.

When given this chance, people opened up to their unique magic and began making music and having fun! During one workshop, students asked if they could play in a recital of peers at the end of the week, as a way to step out of their comfort zone and offer a gift to new friends.

We extended the offer to everyone and were amazed at how many people wanted to share. This idea stuck and at every future workshop, we required students to play a minimum of one minute—either in front of their peers at the Ranch, or if they felt like bringing their music to a wider audience, they could join on stage at Helena’s Myrna Loy theater, where we held a fundraiser concert at the end of every workshop.

Were these fundraisers open to the greater Helena community? 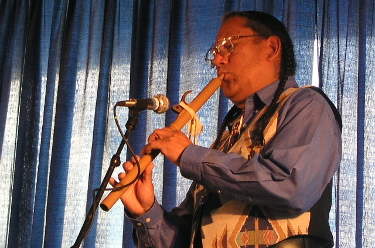 Yes, the fundraisers grew great attention, and we invited various regional musicians and performers to come hang out for a few nights before the concert. India and the Foundation put the artists up in town, and they’d come to meals out at the Ranch and meet everyone. It was nice to show people we weren’t just sitting around smoking grass, you know. We were helping people shape their lives, and it turned into this electric community event.

The workshop students had the opportunity to share the stage with these musicians, and people blew the lid off their perceived limitations. We all learned that we are capable of so much more than we can imagine. I still get letters from students who attended years ago, telling me other hard things they’ve done that stemmed from what they were able to accomplish and overcome at the flute workshop. The flutes are tools for self-awareness—tools for finding the confidence to expand beyond yourself. I simply give people a roadmap to find their way.

How have you used the flute in your own journey of self-expression and growth?

When I initially began teaching secondary school, I was reluctant to speak about anything besides what I was hired to do: graphic design, visual arts and photography. I stayed within the lines of public education and its unrewarding sycophant of discipline.

In 1984, working with the Heard Museum in Phoenix and the Arizona Commission of Arts as an artist and educator, something clicked in my work with younger people (elementary to middle school). I started feeling like, “This is what I want do. This is who I am.”

I began bringing more of myself to my work, which included my heritage, my experiences, my knowledge, my musical background and interests. Things began opening up, and I was invited to give talks on American Indian culture, history, lifestyles, colonialism. I brought a tipi into the classroom, and we’d talk about the life of the Plains Indians, the hardships they had to overcome.

For the workshops at the Feathered Pipe, early on, we had students who just couldn’t stand up, couldn’t even blow on the instrument—and I’ve been that scared to be seen, too. I know how it feels. We invited our flute students, as the kids invited me, to bare their souls in a way that’s not qualitative, rather a personal expression of who you are. Even for me, after all these years, it’s still scary to go out on the stage alone or with the music ensembles I work with and not know what I’m going to do next. But I do it anyway.

What role did the Ranch play in helping you find the courage to show up for yourself and others? 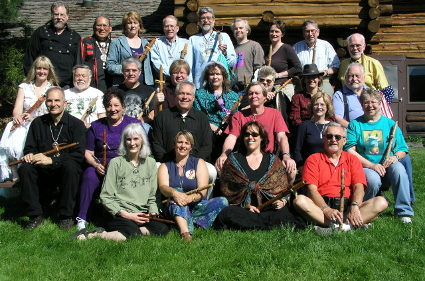 I was raised to believe that my native people had been wronged and that I shouldn’t like people or trust others. I always had a feeling that this wasn’t the way I wanted to be, and when I served in the Navy, I was introduced to Buddhism. I resonated with the inclusivity of the philosophy, and it taught me to realize that I am limitless in my awareness. I can be whatever I wish to be, from one moment to the next—and I can change.

In 20 years of RNAF workshops at the Feathered Pipe Ranch, India Supera offered Ken and I a space where we could further this manner of thinking. I will always thank her for that! The Ranch allows people to explore what it means for them to be an individual on the world stage, to actively participate with others and to understand that we all have the same fears. We have to learn to acknowledge these fears in a way that doesn’t limit us, but allows us to grow and become more than we were yesterday.

The Feathered Pipe is a very important spot, a tiny seed; when people go there, they get a portion of that seed, and if they intuit everything that’s being taught, that seed will grow into something within them and allow them to become more outward about their sensibilities—to discover how they can serve the world.

When I see people who are eager to express and grow and change, I want to show up to facilitate that and to honor them. In my eyes, we’re all shades of the same color. We all play a role, and we’ve all come from worlds of suffering. My specific way through the world is through music. Yours might be some other form of art or writing or dance or teaching. But, we have to hold our songs. We must learn to be ourselves.