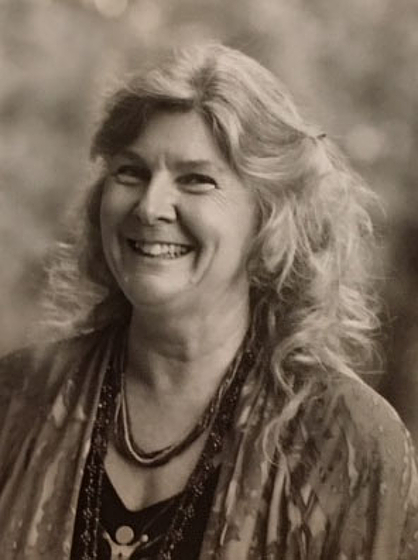 Whenever I think about Jananne nothing but love comes up in my heart and head. Our experiences together will always live in my memory.

We did a cruise in 1984 called “Into the Arms of the Goddess” which we nicknamed “Into the Armpits of the Goddess” because everything that could go wrong went wrong. Once we almost got arrested because some among our group were old-time protesters who tried to get us into a site that was closed. We were 27 women on two beautiful, tiny (meant for 5-6 people) wooden sailboats. Jan, Arisika Razak and I were all in steerage and had to sleep on the deck. The ocean was so wild in September that we felt Poseidon had come to take us back to the sea. The winds were so strong on some days that we had to pull into safe shores. 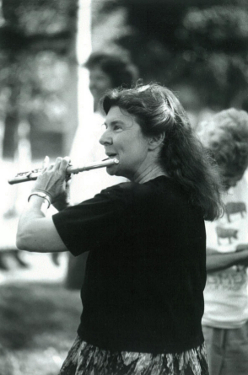 There was so much chaos on this trip. It was overbooked, our boats were far too small,  just chaos. My favorite memory of Jan was at those times of chaos when she would go into the center of the ruins and begin to play the flute and everything would settle into peace, quiet, deep meditation and acknowledgement that we were where were supposed to be. Then we would leave the site and chaos would return.

Jan was the ultimate Earth Mother. She once said to me that once you are a mother you don’t know the meaning of yuck anymore. When people were sick in the rough seas and vomiting over the side of the boat, she held them and comforted them with the most grace I’ve ever seen.

One of the women, Claire, opened a fortune cookie and it said, “You understand and honor your parents so much more after you destroy the lives of your own children,” which we all understood, being mothers ourselves.

Jan and I felt that we couldn’t be on the Mediterranean, sitting on the decks overlooking the sea without having a Galoise cigarette and a glass of Retsina. All the other gals were sipping wine while we knocked back the liquor – had to be cool in Europe, eh?

On the last day of the trip we were sitting in beautiful Santorini and somehow, through Jan’s music and our love of the archetypes, we felt completely at peace in the world. I remember Enya was playing and her music transported us to other times and other lives. Jan and I had been roommates many times on many trips since then. I don’t know the details of her life, but by the end of our trips together we knew each others souls. We talked a lot about our daughters and we prayed that they would grow up to be Amazons. I did not see Jan with her grandchildren, but her daughter Jessamyn tells me that Jan was a playful and present grandmother, too.

Peru was another wild trip. We went for the eclipse of the sun. We went all the way to Arequipa, where the Maoist guerrilla insurgents “Shining Path” were active. Many of the eclipse groups had cancelled due to the perceived danger. We had been planning on camping but instead went straight to the luxury hotel. I have a great photo of us lying on the lawn with our eclipse glasses on. 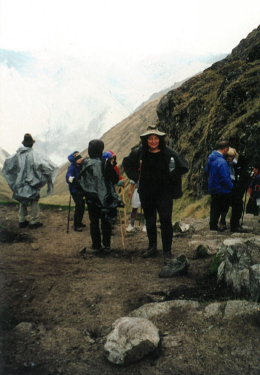 At the airport everybody else had trouble getting luggage loaded, but gathered around us were all these husky young men, eager to assist us. All the other groups were interested in how I managed to secure help and safe passage in a troubled time. We were the only ones who could find porters, but the porters, who had been hired by local friends, turned out to be Shining Path soldiers! No one ever bothered us because we were under the protection of the Shining Path!  That was an amazing experience.

Of course our all-time great trips together were to England and Ireland. Jan played flute at many goddess sites. We are still involved with the prayer group from this trip. We always really bonded on these trips – you really bond in travel when your souls touch. All three dimensions met on this trip, Heaven, Hell and Earth.

Every trip that Jan, Jean Bolen and I went on created a strong bond among us travelers. These circles have kept in touch and formed other circles.

Jan was always so light about living and dying. When we were together it seemed to be imparted to me, and I was able to impart it to others. Then there were the many beautiful workshops we did at the Feathered Pipe – each was a mystery of its own. The Blacktail Cave was always very important to us. Jan did the same thing she did in Peru. She would go to the mouth of the cave with her acrylic drum (leather drums get too cold to sing) and her flute, and we would stay in this cave, which was 44 degrees for four or five hours at a time. Everyone would go to where Jan was standing and give their prayer. It amazed me how long we could stay there—and how we didn’t notice the time passing. The beauty of entering the cave with Jan and Jean was that we descended to the underworld and came out reborn. For those who don’t know the cave there is a narrow passage, like a birth channel, into the cave and from which we emerge into the light.

The last time Jean and Brooke Medicine Eagle led a workshop at the ranch, Jan came to visit and participate. It was so wonderful. Jean and I had just been introduced to Storm Large and her wonderful song “My Vagina is 8 miles wide, absolutely everyone can come inside.” You can just imagine the great fun that Jan put into dancing to this song. Jan was our very own Baubo (the Goddess of Mirth). The myth says that when Demeter was wandering the Earth in mourning over the loss of her beloved daughter, Persephone, Demeter abandoned her duties of bringing fertility and took refuge in Eleusis, disguised as an old woman. Everyone tried to console and lift the spirits of the depressed old woman, but to no avail—until Baubo showed up making humorous, risqué jokes. Demeter began to smile. Then, Baubo suddenly lifted her skirt in front of Demeter. Whatever Demeter saw under Baubo’s skirt, it finally lifted her out of her depression and she responded with a hearty belly laugh!

Jan and Jean were such opposites and so close that we called them Twins. People would call Jan Jean and vice versa. It reminded us of the Arnold Schwarzenegger and Danny DeVito “Twins” movies.

Jan always made us laugh. She saw the lighter side of birth, death, politics, even taxes. I was very grateful that Jan found her true partner, Rico Stover because with him she experienced deep love and was able to have a companion in music.

In this long journey together may we walk hand in hand until our models are recalled. May the circle be unbroken by and by.