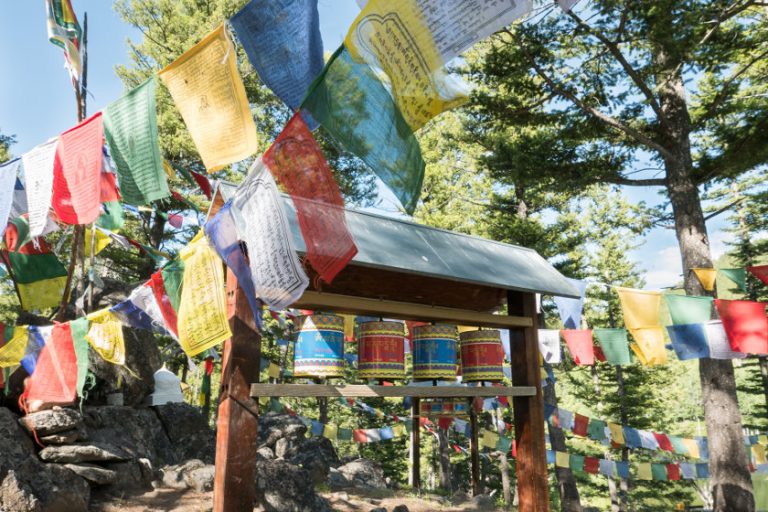 The Feathered Pipe Ranch Stupa: How it Came to Be – VJ Supera

VJ Supera, inveterate world-traveler and elder sister of Feathered Pipe founder India Supera, shares the hidden story behind the origins of the Stupa at the Feathered Pipe Ranch. Long a refuge for quiet meditation and nature-immersed solitude, now we come to the significance of it all. Enjoy!

In 1987, I had the biggest adventure of my life: I went to Mount Kailash in the Western tip of Tibet to circumnavigate the sacred mountain. It’s 32 miles to circumnavigate Mount Kailash. Tibetans call this act Kora. Hindus call it Parikrama, which means moving around an object of devotion as an indication of reverence. 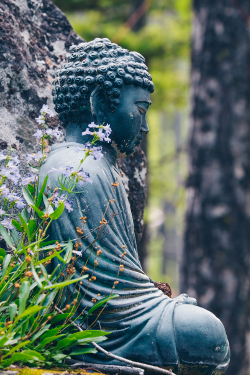 Although I had known about Mount Kailash from the moment I landed in Nepal in 1969, it took me a while to get there. Mount Kailash was the mystical home of Lord Shiva, and the hippie clan knew about Lord Shiva because he was our “Ishta Dev,” our chosen deity. He was the protector and the destroyer. He was always in meditation, and if he wasn’t, he was smoking chillums, a clay pipe full of hashish, tobacco or grass. We would light chillums in respect to Lord Shiva and chant the mantra, “Hara hara Mahadev” or “Boom Shankar.”

It was quite complicated to get a visa to Tibet, let alone a permit for Mount Kailash. But, I knew I had to do it—or die trying. Western Tibet is vast, the roads primitive and almost empty… you can get stranded in one lonely outpost for five or six days waiting for a ride and it’s never guaranteed. You don’t know if you’ll make it or not—and even if you make it, you don’t know if you can live through the ordeal. The altitude averages 16,000 feet, it’s freezing, and there’s very little life up there.

In truth, you can get there only two ways: punya (merit) or by the Lord’s grace. I wondered if I had done enough good deeds in my past lives to warrant a safe circumnavigation or if the Lord could give me enough grace to make the trip. What I did have on my side was that before I left for the pilgrimage, Sai Baba blessed my japa mala and the white cloth that I carried in a pouch around my neck.

We hitchhiked on Chinese trucks left over from the war, and the entire trip took more than a month. Long story short, I made it around the mountain and back—and lived to tell about it. But that’s a story for another day.

When I came back from Western Tibet that summer, I moved to the Feathered Pipe Ranch. I pitched a tent near the outcropping of rocks above the lake and it felt like such a holy spot that I had the idea to build a stupa there and include some of the special things that I gathered along my travels. Stupa is a sanskrit word for “heap,” and is generally considered to be a spiritual monument and a receptacle for sacred objects. 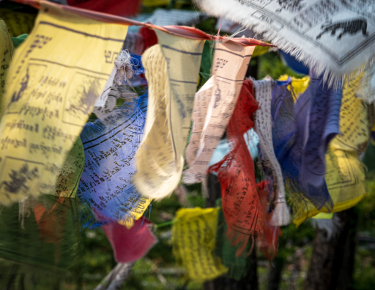 I had brought back several sacred objects from Western Tibet: I had water from Lake Manasarovar, which means “lake of the mind;” soil from the footprints of Milarepa, a great saint who lived in the region long ago; carved mani stones from Dolma La Pass, a 18,600-foot pass that you have to cross to complete the kora of Mount Kailash; and a scarf—a Katha—that was presented to me from a monk who sat in the fifth Dalai Lama sitting room at the Potala.

Luckily, my friend was passing through from California, and he helped me make a mold for a small cement stupa using chicken wire, wood and other materials. I layered the casting with cement, letting each layer dry before painting it. In the end, we had a hollow mold that allowed us to place the artifacts inside. I also put the shoes I wore around Mount Kailash inside and we sealed it up. On August 8, 1988 (8-8-88), we installed it, hung prayer flags and blessed the humble beginnings of our Ranch Stupa.

My co-conspirator in the stupa project was JV Bennett, who at the time worked at the Ranch as “the get person,” the one who ran errands and got supplies whenever necessary. Years before, I had ordered a big shipment of cement Buddhas and had quite a few left, so slowly he carried those up to the rock outcropping as well.

In the past 33 years, we’ve celebrated many Saga Dawa’s at the stupa, a full moon celebration in honor of the birth, death and enlightenment of Lord Buddha. Retreaters from different workshops have come up and offered prayers and prayer flags. Traveling monks have come through and offered puja and more prayer flags. And of course, Karma Tensum and his family visit as often as they can to offer prayers and perform ceremonies. Friends have also brought vessels and spread ashes at the stupa to honor their loved ones and integrate them into the earth.

Fast forward to October 2019, India left this earthly plane and a very auspicious thing happened just hours after she died: Some friends of ours, two sisters Mary and Charlotte Boscamp, gifted the Ranch with two beautiful sets of hand-painted prayer wheels that had come from the Namdroling Tibetan Buddhist Center in Bozeman. We accepted the gift and waited until the following summer to incorporate them into the stupa. 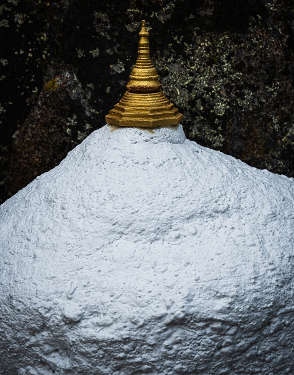 Crystal and her family came from Holland in June 2020, and we started planning a ceremony for India. Johnny and Ilan installed the new prayer wheels, took the stupa down and gave it lots of loving repair, which it needed after 33 winters. Crystal placed some of India’s ashes in a little wooden vessel that she bought in Burma years ago. Her kids painted it gold, they glued it to the top of the stupa and the stupa resumed position in the rock outcropping where it had been for decades.

In July 2020, we finally had a beautiful ceremony to celebrate India’s life. We put up hundreds of new prayer flags, our Tibetan singer friend Tsering Lodoe sang and chanted sacred mantras accompanied by Jen Daly’s Himalayan singing bowls. Karma and his wonderful family gave us more Tibetan prayers, friends and associates from all over the world sent feathers and gifts in India’s memory, and we spread more of her ashes.

I think overall, the stupa has turned out better than I even planned because of how many thousands of people have brought their prayers, good energy and healing to the Ranch, and how much people love visiting the stupa when they are here on retreat. What began as a way to preserve artifacts and memories from my adventures has become a spot for the sacred adventures and lives of this community to live on forever.

*Special thanks to Zane Williams and Melina Meza for the images!