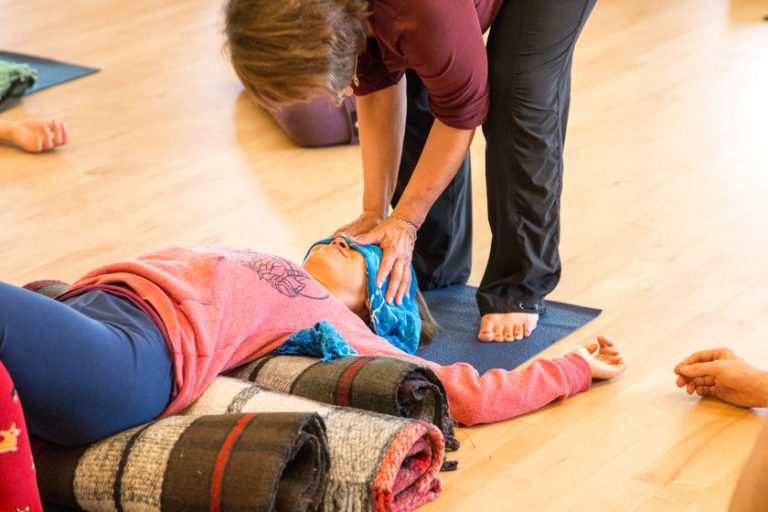 Returning to the Self: The Practice of Pratyahara – Judith Hanson Lasater

During my first few months of taking yoga classes, we learned the classical version of the sun salutation and were encouraged to bend backward deeply during the first step of this twelve part series. Not only were we encouraged to bend backward deeply, we were taught to take our head all the way back. Occasionally someone would pass out in the middle of the movement. Luckily no one was ever hurt during the fall to the floor. The fainting probably occurred because one or both of the vertebral arteries in the neck were momentarily occluded, thus reducing blood flow and oxygen to the brain. What was interesting about this phenomenon was that this fainting was considered by the other students in the class as some form of spiritual event. For many years I have suspected that this sudden fainting and withdrawal from the world was not a spiritual event at all but a physiological one. I still reflect however, on the confusion we all have about what it means to withdraw from the senses and the world.

In the Yoga Sutras of Patanjali, the second chapter is filled with teachings about the astanga or eight-limbed yoga system. The astanga system is presented as a series of practices which begin with external limbs like ethical precepts and move toward more internal limbs like meditation. The fifth step or limb is called pratyahara and is defined as the conscious withdrawal of energy from the senses. Almost without exception yoga students are puzzled by this limb. We seem to inherently understand the basic ethical teachings like satya which is the practice of truthfulness, for example, or pranayama, the use of breath to effect the mind, or the practice of conscious posture or asana. But for most of us the practice of pratyahara remains elusive.

One way to begin to understand pratyahara on a experiential level is to focus on a familiar yoga pose, savasana, the corpse pose. This pose is done lying supine on the floor and is the practice of deeply relaxing. The first stage of this asana is about physiological relaxation. In this stage, as one becomes comfortable lying on the floor, there is first an awareness of the muscles gradually relaxing, then the breathing slowing and finally the body generally letting go of tension. While delicious, this stage is only the beginning of the practice.

The next stage of savasana is different because it pertains to the mental sheath or level. In the second stage of savasana there is a sense that one is withdrawing from the external world without loosing contact with it. This is an experience of pratyahara. Most of us know this state; when one is in this state it feels like one is at the bottom of a well; the sounds that occur both in and out of the room where one is lying are registered, for example, but these sounds do not create disturbance in the body or mind. It is this state of non-reaction that I am calling pratyahara. The actual registering of input by the nervous system still occurs but there is virtually no interaction with that input. There seems to be a space between stimulus and response. In common parlance, one is in the world but not of it.

For years I interpreted the teachings I heard about pratyahara to mean that I must physically and literally withdraw from the world in order to be a true disciple of yoga. I would react with dismay at this teaching; I was an engaged person, busy studying physical therapy in school to improve my yoga teaching, additionally I was married and contemplating having several children. I sometimes worried that unless I learned to separate myself from the world I was a lesser or inferior yoga student.

I like to believe that Patanjali means something different from a simple withdrawal from life. Today the practice of pratyahara means to me that while I participate in the task at hand, I remain separate from my reactions. In other words, no matter how much meditation and postures and breathing I practice, I still continue react to the people and situations around me. This reaction in and of itself is not the problem; my attachment to the reaction is. Where the practice of pratyahara is manifested is the space between the stimulus that comes into my nervous system via the sense organs and my reaction to that stimulus.

Practice gives me the choice about my reaction. I can choose to dance with that stimulus or I can choose to step back and not add my conscious participation with the stimulus. In other words, the variable is me and how I choose to use my energy. If I physically retreat to a cave in the mountains I can still agitate my nervous system; I can still generate thoughts and re-live past reactions which are stimulating. To me the practice of pratyahara is not about running away from stimulation which is basically impossible anyway, but rather practicing pratyahara is about remaining in the middle of a stimulating environment and consciously not-reacting to it.

I can also incorporate the practice of pratyahara into my asana practice. This occurs when I hold a pose; as I remain still I can and often do have a myriad of thoughts about staying or coming up. I have thoughts of judgment about whether I am doing the pose well or not so well. At these times I can choose to withdraw my energy from my thoughts about the pose and focus instead on the pose itself. Sometimes I remember to do this and sometimes not. What is interesting about this process is my urge to escape from the reality at hand. This is not pratyahara but is simply an attempt to escape difficulty, in effect to escape by withdrawing into thought. I find I use this tactic all day long; I escape with my thoughts during boring meetings, during unwanted phone calls, during repetitive but necessary tasks. This is not the withdrawal of pratyahara and therefore actually has the effect of taking me further from myself, the opposite of spiritual practice.

Another way I have begun to practice pratyahara is to pay attention to my need to seek out stimulation as an escape. I try to remain conscious and notice when I want to escape from my life by finding highly stimulating environments. For example, I sometimes want to go to a movie to escape; sometimes I want to go to the mall. Please be clear, it is not the activity of going to the mall or a movie that is in and of itself problematic. Rather, it is using these stimulating activities to escape which is problematic because it interferes with my intention of being present.

When I was a child I used to love to go on carnival rides; the stimulation of the roller coaster would shut out all other awareness. Now that I am a student of yoga I am more aware of the urge to drown out my conflicts by over-stimulation. The process of noticing my paradoxical attempts to withdraw by escaping into more stimulation is powerful way for me to incorporate pratyahara into my daily life. It is at these moments that I begin to understand the difference between withdrawing and escaping, between pratyahara and forgetting my practice. Learning to incorporate my yoga practice into my daily life in this way is a challenge but it is one that gives meaning and direction to my life.