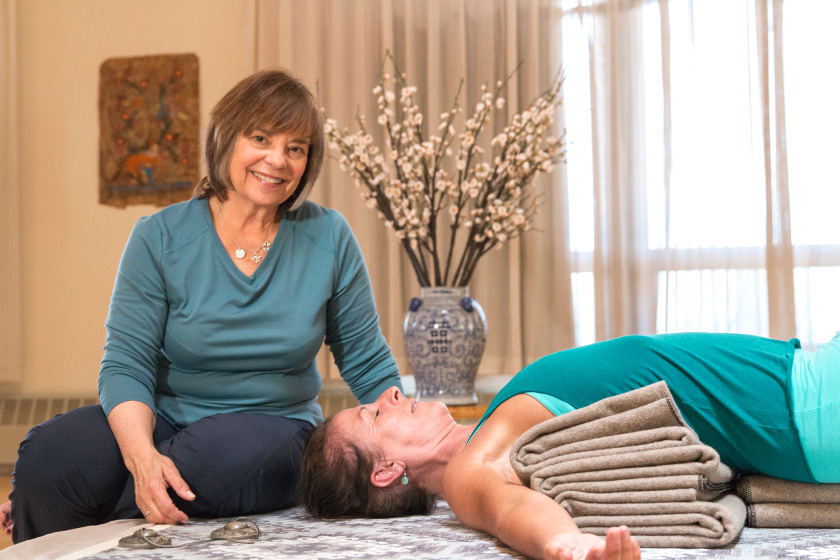 In light of our current global health crisis, Judith Hanson Lasater & Lizzie Lasater are offering a 25 minute introduction to starting your own home pranayama practice. Tune in here.

As a child I used to play a game in the back yard with friends. We would  hyperventilate and then hold our breath until we almost passed out. We thought this was great fun. Little did we realize that we were playing with one of the most powerful physiological and spiritual tools at our disposal: the breath.

We usually take the ability to draw a simple breath for granted, but our everyday language reveals our intuitive awareness that breathing is critically important and powerful. We often talk about “breathing easy” to  show we’ve relaxed and let go of a problem or worry. We use the term, breathing room, when we need more space for sufficient air and thus life itself. And we express our intuitive understanding of the power of breath when we advise angry people to “take ten deep breaths” before they speak or act from anger. Actually, this bit of folk wisdom has a basis in fact. A period of quiet deep breathing causes blood pressure to drop and to stay down for as long as thirty minutes.

The power of breathing cannot be denied. Breathing is at the center of natural childbirth training, and we are taught to breath deeply before we face stressful situations like auditions or oral exams. Breathing is also at the heart of virtually every meditation system as well as most styles of asana (posture) practice. This is because when we pay attention to the breath, it brings us fully into the present. It is impossible to focus on the breath without paying attention to the here and now.

Yoga has always stressed the importance of observing and regulating the  breath. The most ancient source book for yoga practice, the Yoga Sutra of  Patanjali, includes such practice called pranayama as one of the eight essential limbs of yoga. In Sanskrit, “prana” means not just breath but also the life energy that fills the universe, and “yama” means restraint or control. Pranayama makes use of the respiratory apparatus, but the focus of pranayama isn’t simply on inhalation and exhalation. Rather, yogis use the breath to draw in, channel, and store the universal life energy so that it can be used to facilitate self-evolution.

While Patanjali doesn’t instruct the reader in specific pranayama techniques,  he unquestionably includes pranayama as a very important tool for self- transformation. In fact, he claims that the goal of yoga, “the resolution  of the agitations of consciousness,” can be achieved by the controlled “expulsion and retention of the breath” (Chapter I, verse 34).

However, one of Patanjali’s few direct comments on pranayama sometimes  confuses yoga students. In Chapter II, Verse 49, Patanjali states that pranayama is to be practiced when asana (posture) has been perfected. What could this mean? Most of us react negatively when we hear the word “perfected.” As yoga students, we learn early on that there is no such thing as perfection: Each pose is new every day, and each day every pose can teach something new.  To better understand Patanjali, we need to consider what he meant by asana and perfection. The word “asana” means “seat” as well as “posture”, and in  Chapter II, Verse 46, Patanjali says that asana should be both “steady” and “comfortable”. In other words, when Patanjali directs us to perfect asana before practicing pranayama, I interpret his teaching to be that we should be able to remain steady and comfortable in a seated meditation posture like Padmasana (Lotus Pose). Because maintaining a stable seated pose can be such a difficult task, I teach students to do pranayama lying down for the first year or two. This allows them to be steady and comfortable and not become distracted by struggling to keep the chest open and spine long in a seated pose.

The Physiology of Breathing

To understand why breathing practices can be so transformative, it helps to know a little bit about the physiology of the breath. Even though we take it for granted as a simple part of life, breathing is a complicated process that involves three distinct stages. The first stage moves oxygen into the body, across the membranes of the lungs, and into the bloodstream. At the same time that oxygen passes from the alveolar sacs of the lungs into the bloodstream, carbon dioxide, a waste produced by metabolic processes, moves in the opposite direction and is expelled from the body by exhalation. This first stage, called external respiration, is what we normally refer to as breathing.  The red blood cells bear fresh oxygen throughout the circulatory system, preparing the body for the second stage of breathing called internal respiration. In this stage, the life-giving oxygen crosses the membranes from the red blood cells into all the other cells of the body. Once this happens, intracellular respiration occurs as the cells make use of the oxygen for growth, repair and replication. This use of oxygen in cellular metabolic processes is the final stage of breathing.

Supporting thousands of years of yoga experience, modern science has shown that pranayama can have profound physiological effects. One interesting study  focuses on the benefits of breathing while lying on your back. When you practice lying down, blood spreads more easily throughout the lung tissue, just as water spreads out, creating more surface area, when you pour it on the floor… because of gravity the water spreads out; with supine breathing the blood (and therefore oxygen) spread out more easily in all directions. With more surface area available, you are able to use more of the oxygen which enters the lungs, however large or small the amount.

Another interesting study found that yoga-type respiratory training may have  elements in common with adaptation to high altitudes This study shows that we  can train ourselves to be less affected by situations in which reduced oxygen is available.  One possible explanation for this training effect is that the practice of breath retentions increases the ability to tolerate build-up of carbon dioxide in body. (Carbon dioxide is the chief waste product of breathing and is expelled during exhalation.) Interestingly, it is the level of carbon dioxide in the blood, not the level of oxygen, which drives the body’s respiratory apparatus. If you can tolerate increased carbon dioxide in your blood, your body will not feel a need to breathe as often, and you can get by on less oxygen.

Of course, the ancient yogis didn’t use the language of modern physiology to  explain the benefits of pranayama. To yogis, pranayama is much more than  breathing practice. According to yoga theories, once prana is drawn into the body and properly restrained, is can be directed into subtle energy channels called nadis. These nadis course through the body in a way similar to the nerves or to acupuncture meridians. It is these subtle channels which are believed to carry our spiritual energy. When you can control the prana in the nadis, it can be directed to arouse the kundalini which lies sleeping at the base of the spine. As the kundalini moves up the spine, it activates the spiritual energy centers known as chakras. This whole process is believed to awaken your dormant higher consciousness, a state of deep understanding and wisdom.( I advise students who are interested in practicing pranayama in this subtle and intense way to seek out the advice of an experienced teacher.)

While such a powerful awakening sounds wonderful, I find that my personal pranayama practice helps me more with the mundane matters of slowing down and remembering that I am more than just the tasks I accomplish, the classes I teach, and the articles I write. Of course, I wish my kundalini well on its upward journey, but day by day I simply hope that I can open my heart and allow for the possibility of joy in my contact with each person I meet.

One of my students once asked me why one would want to manipulate breathing, since it is a completely natural part of the life process. I thought about  this for a while and realized that although breathing is natural, for most of us it remains unconscious and uncontrolled. As long as the breath remains unconscious, it is not part of spiritual practice.  During pranayama one learns to vary the length of inhalation and exhalation as well as to suspend both, either to retain the inhaled breath or to keep the lungs completely empty. These practices make breathing a conscious and controlled action. By bringing this previously unconscious activity into consciousness, and by focusing our awareness totally on the present moment, prananyama begins to transform breathing into a spiritual practice.

Even though full control of the breath can take years to perfect, to me the  perfection of this control is not the highest form of pranayama. The highest form is to remain completely aware of the breath, allowing it to come and go  without injecting control into the process.  To see just how difficult it is to be aware of the breath without controlling it, try this experiment. Find a quiet time and place, and sit or lie comfortably with the spine long and the chest open. Close your eyes and begin to pay attention to your breath. If you are like most people, as soon as you begin to pay attention to your breath you will begin to change it. This is the ego in action. The urge to control the breath once we are aware of it is the ego trying to control everything it perceives. The highest form of pranayama is to remain completely aware of and at one with the breath without  interjecting ego and thus control into the process. Try this practice whenever you think you do not want to control everything and everyone around you. It is an eye-opening and humbling experience.

This ability to remain aware of the breath and yet not control it is at the heart of meditation. Virtually all systems of meditation begin with simple breathing exercises or with a technique to make one aware of the breath. The breath makes a perfect focus for meditation: It is immediate and always there, whether we’re waking or sleeping, running or sitting. An exquisitely sensitive barometer which registers our reaction to internal and external events, the breath is a constant background mantra reminding us of our connection to spirit.