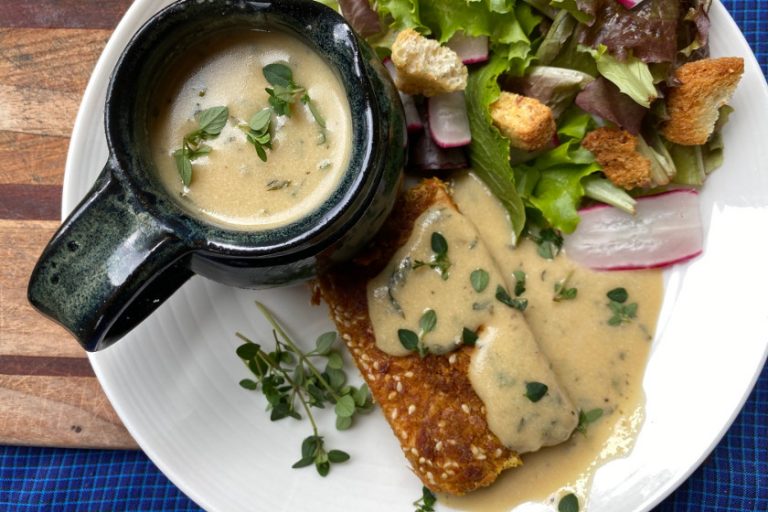 Did you hear that?

The rumble was loud enough to get major media outlets crowing what supporters of meatless Mondays and vegetarianism have known for years: eating less meat is one of the most powerful ways to lessen your impact on the global climate emergency and cook in a more sustainable manner.

Last week, online guide Epicurious.com announced that, going forward, it would refrain from publishing any new recipes featuring beef as an ingredient, nor highlight the meat on its homepage or Instagram feed.

For the website, where home cooks flock for kitchen inspiration, this is huge news. As its declaration made clear, Epicurious’ choice was “solely about sustainability, about not giving air-time to one of the world’s worst climate offenders.” It further categorized the decision as “not anti-beef but rather pro-planet.” 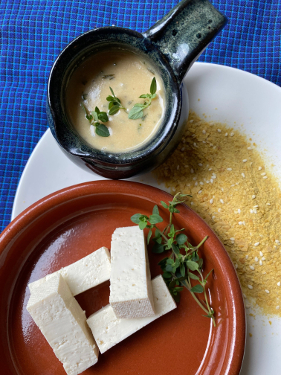 Days after the Epicurious announcement, Daniel Humm, chef and owner of New York’s 3-Star Michelin restaurant, Eleven Madison Park, let it be known that when his Manhattan dining room reopens next month, after over a year of pandemic closure, seafood and meat would no longer be on the menu.  “The current food system is simply not sustainable, in so many ways,” Humm acknowledged.

Considering that Eleven Madison Park, awarded the #1 spot on The World’s 50 Best Restaurants list in 2017, is famed for its foie gras creations, butter poached lobster tail, and lavender glazed duck, this is an epic shift.

“It became very clear to me,” Humm clarified, that after the year-long rethink spurred by the pandemic, “our idea of what luxury is had to change. We couldn’t go back to doing what we did before.”

Industrial cattle farming has long been known as particularly wasteful, requiring ten to twenty times the resources to produce animal versus vegetable protein.  FAO, the Food and Agriculture Organization of the United Nations, estimates that over 14 percent of current global greenhouse gases are the result of the intensive farming of livestock.  With pollution to waterways, threats to biodiversity, and land use added to the mix, it is logical to see how eating less meat is a powerful choice a person can make in reducing their carbon footprint.

Though these decisions by industry leaders secured bold print headlines and will absolutely broaden the culinary worldview, several food folk countered the media hubbub with a bit of a “truth sandwich,” as my ten year-old daughter would say: there exists a long lineage of chefs, restaurants, and cooks who have been serving delicious plant-based menus for years, prioritizing their commitment to the best ecological choices for our planet and animal welfare.

Case in point, The Feathered Pipe. Just ask any guest who has tried to maintain stillness of mind in Savasana with tempting aromas wafting in from the Ranch kitchen.

After 45 years of wellness retreats and wholesome meals, a remarkable lineage of Feathered Pipe cooks have refined and adapted an array of vegetable recipes and made them their own.  Workshop participants travel the world during a weeklong stay, thanks to the FPR kitchen’s freshly-prepared and creative International cuisine.  These meals even spawned their own cookbook, one of the more popular souvenirs for guests to take home after a restorative and delicious stay.

Ithaca’s Moosewood restaurant and San Francisco’s Greens are other places that have steadfastly celebrated vegetables since the seventies. These plant-based pioneers persuade diners with deliciousness rather than doctrine and reveal vegetarian eating to be so much more than the crunchy stereotypes of wheat germ, organic honey, and sprouts galore.

“What Daniel Humm is doing is BIG,” a noted food writer tweeted last week.  “But can we also acknowledge that this is what Amanda Cohen has been doing in New York at Dirt Candy for YEARS? 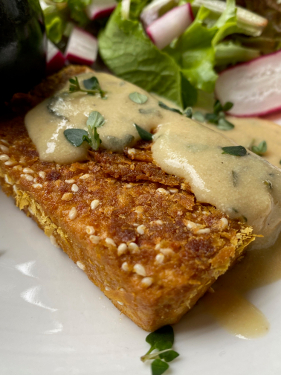 The soil-based sweets referenced above are namesakes of Manhattan’s first “vegetable restaurant,” helmed by Cohen, a stellar Canadian chef. Her mushroom mousse, eggplant tiramisù and meat-free muffuletta sandwiches (stacked with paper thin layers of smoked celeriac, pickled carrot, vegan provolone, and tofu skin) have helped Cohen gain acclaim and scores of fans over the nearly thirteen years she has been serving vegetarian meals on the Lower East Side.

Here’s the good news: including more plant-based meals in your diet does not require kitchen wizardry nor a trip to the big city. No one here is going to ask you to smoke your own celeriac.

An easy first step is to start with one of the most beloved Feathered Pipe Kitchen staples, the easy to assemble and quick to prepare Tofu Steaks with Yeast Gravy.

Hold on!   Stay with me for just a smidgen more.

I distinctly felt the earth shift again from the few of you who bolted for the exit once tofu and nutritional yeast were mentioned. Fear not!  If these ingredients have left you unsurprised in the past and your eyebrows inch upwards with doubt and suspicion, I urge you to give them another try.

The recipes below prove that meatless meals do not have to be difficult or time-consuming to garner rave reviews.  With a splash of tamari and a dusting of the savory flakes affectionately rechristened as “nooch” by millennials, you can plate up a healthy, delicious dish that will not only taste good, it will do good for the planet.

The world press may not report on your skillet skills with these steaks and gravy; make this dish, however, and those at your table will most likely ask you for a second helping… and for the recipe too. 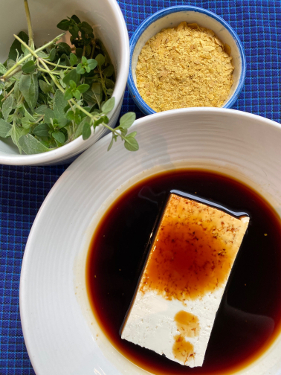 Slice the block of tofu in to 10 even slices.  Dip each slice in tamari and then dredge in nutritional yeast.  Fry the slices in a small amount of oil on medium or low heat.  Sesame seeds added into the yeast are a nice edition.

This gravy is extensively used as a side dish in the FPR kitchen. It is great over tofu steaks, burgers, baked zucchini, grains, etc… 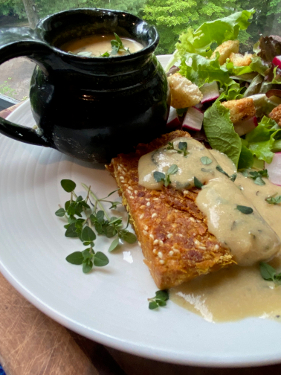 Heat the oil and whisk in flour, 2 tablespoons at a time.  Add lukewarm water, stirring until smooth.  Then add the remaining ingredients.  For a richer gravy, use milk instead of water.  Serve hot.

Sometimes, it can take a few minutes for the gravy to thicken.  Just keep stirring, to avoid lumps and give the sauce time to come together.  If it is still too thin for your liking, you can always add an extra tablespoon of rice flour to help the thickening along.

When buying nutritional yeast, which can be found in health food stores and in the spice aisles of most supermarkets, be sure to check if the yeast has been flavored or has added salt.  With the popularity of “nooch” sprinkled on popcorn for an added umami kick, many companies are mixing in spices and other additives to their nutritional yeast options.  Though nutritional yeast with added Himalayan seas salt and apple cider vinegar is a fine pairing with a bowl of popped kernels, the extra salt will make a yeast gravy that is far too salty to enjoy.  Stick with the plain,  “nooch” when this gravy is made.