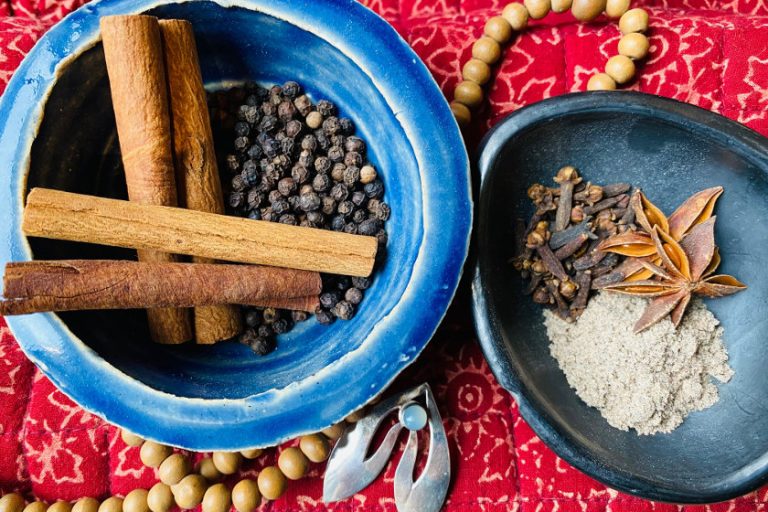 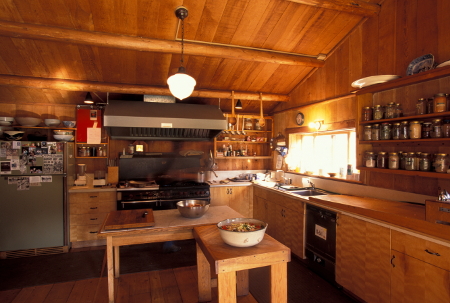 Everyone who visits the Feathered Pipe returns home with stories.

Some share tales of sleeping in a tipi or waking up to welcome the sun on the lake’s dock in peaceful meditation.

Others tell of the time when the actor, James Woods, appeared in the main lodge while filming a movie nearby. “Hi,  I’m James,” he said casually as he strolled past the screen door. “I just wanted to see what this place was all about.”

My first time at the Feathered Pipe (in the mid-1990s) evolved a glossary of its own: sucanat, tahini, nutritional yeast, and tamari.  Though these names may be commonly understood today, back then — to me — they were jargon from another planet.

As a college student from out East, visiting friends who cooked at the Feathered Pipe, my time was mostly spent by the kitchen door. From there, I had the best seat in the house, watching the staff prep and serve the globe-spanning, wholesome dishes that gather the weekly workshop community to the table.

For anyone who has not crossed the threshold of the Feathered Pipe’s kitchen, let me paint you a picture.  It is a room of wooden beams and metal spoons.  Mason jars line open shelves: a kaleidoscope of spices, legumes, grains.  Knives on wooden cutting boards provide gentle percussion with the occasional clang of a metal pot and faucet surge.

I distinctly remember a strip of masking tape affixed to the Hobart mixer proclaiming that it should be addressed as “Hobie.”  Here is a room where even the appliances were given names and backstories.

The Feathered Pipe’s kitchen is where I learned that tofu could be delicious (Oh! Those tofu steaks!) and how to juice half a lemon in your closed hand with a fork, catching all the seeds.

At the tea table, set out daily by the kitchen crew, I was introduced to the distinct perfume of Montana Gold (a rooibos tea with cloves, cinnamon, and orange peel) that still transports me back to the wooden floor of the yoga room the instant I brew it.  I also discovered, from this same table, that water tastes better when sipped from a stainless steel cup.

More than recipes were passed down in the kitchen.  As cilantro was chopped for the weekly Indian night dinner, someone might retell a story from the Feathered Pipe’s founding…or share a tale of yogic flying above the streets of Kathmandu in the ‘60s.  You never knew which version you were going to get. That was part of the magic. 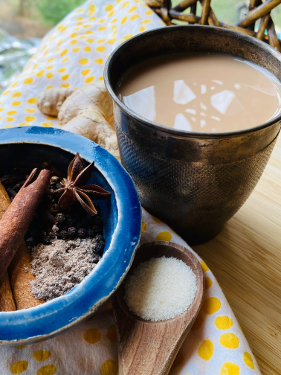 If you were a lucky guest, Asia would come to you in the form of VJ’s traveling bazaar. Woven carpets rolled out as she set up shop on the lawn, offering an array of shawls, bangles, beads, and buddhas.  As dust and nag champa mingled, VJ held court, chronicling her world wanderings and buying trips in India, Tibet and the other ‘stans beyond.

It was while seated on one of VJ’s carpets, listening to her recount the fascinating history of dzi beads, that I took my first sip of masala chai. This spiced and milky Indian tea is another flavor memory that forever connects me — and many others — to the Feathered Pipe and its kitchen.

It is a recipe that I have continued to brew, in so many kitchens since, to create a sense of peace, warmth, and breathing room.

Available everywhere in India, as the Feathered Pipe’s cookbook so perfectly puts it, “chai is the drink of the people and a way of life.”  To most of the world, chai simply means tea, but to those in Delhi ( and your favorite Indian restaurant) the name evokes a kick of spicy, sugared caffeination.

From the market to the train station — and crowded truck stops in between —  the call of the chai-walla is a constant in the daily Indian soundtrack. The high pitched holler of “Chaiiiiiiiii-eeeeeee!” announces to all that a sweet break is nearby. Often, chai is ladled from large metal pots and served in biodegradable cups of clay that can be smashed to bits after the last drop is swallowed.

The spice blend (or masala) used varies from family to family.  While some may add star anise, black peppercorns, and nutmeg, the four main staples — green cardamom, cinnamon, cloves, and ginger — make up its structural core.  Ayurvedically speaking, these key ingredients give masala chai anti-inflammatory properties that also aid digestion and boost immunity.

Ground spices are easy to use, though some insist that using whole spices (cinnamon sticks, green cardamom pods and intact cloves) allows for even more flavor extraction.  A strong black tea provides the base (like Darjeeling, English Breakfast, or PG Tips) with sugar or honey sweetening the deal. A splash of milk mellows the brew.

Provided for you below is the Masala Chai recipe from the Feathered Pipe’s own cookbook, Recipes From The Feathered Pipe Ranch.  Try your hand at tinkering with the spice blend and create a personal masala of your own.

May this warm cup of calm allow you to relive your own stories from the Ranch or dream of the future visits to come.

To further savor the moment, ponder these wise words as you sip your chai and you too will understand a bit more of the magic of the Feathered Pipe Kitchen.  There’s no other place quite like it.

“To avoid going crazy over food, remember that it is only one ingredient of health, the others being a sense of meaning and purpose in life, exercise, rest, clean air and water, natural light, the love of family and friends, and so on.  In your personal recipe for happiness, don’t overdo one ingredient — you’ll then have to double or triple the others. If you’re especially sloppy, this can take lifetimes.” 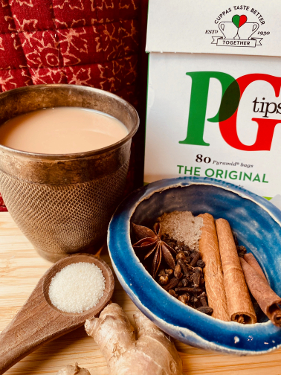 — 1 quart water
— 1 Tablespoon black tea (or 3 teabags)
— 1 cup milk
— Honey or sugar for sweetness
— Spice options—use ONE of the following:

Bring the water, spices and sweetener to a boil.  Add black tea and let it boil a few seconds.   Add milk and bring it back to a boil.  Before it boils over, remove from heat and strain into teapot or cups.  Black teas like Darjeeling, Earl Grey, Lipton, or Russian Caravan work well.