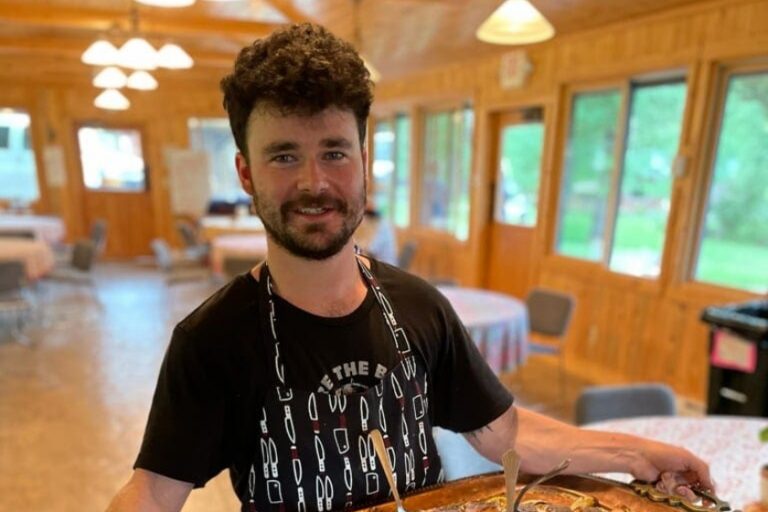 Feathered Pipe’s new culinary director, Sam Wieland, began visiting the Ranch with his family when he was 8 years old. What began as a summer retreat from New Smyrna Beach, FL soon became a permanent residence and a chance for his creative genius to grow year after year.

What was it like to spend summers at the Ranch as a kid? 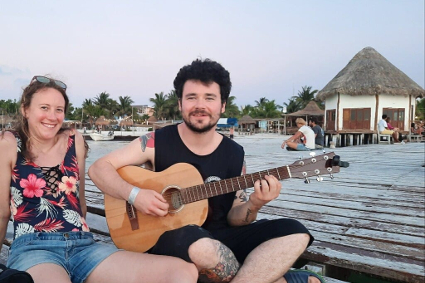 Honestly, at first, I was mad that we left home every summer, because I just wanted to hang out with my friends. But then I really grew to love it, and there were always other kids running around here. I remember the staff at that time were welcoming and let me hang out in the kitchen, just watching them prep and cook and ask questions. That’s where I spent a lot of my time if my mom was in a workshop or taking yoga classes in the main lodge.

When we officially moved here, when I was old enough—and tall enough—to legally start working, I became the dishwasher. Then I prepped the salad bar, helped cook lunches and continued to gain responsibility from there. In summer 2019, I was the assistant to the chef most nights, and I was also making and managing two dinners per week by myself. On the weekends, I created new recipes and played with different ingredient pairings—that’s when I really became interested in bringing creativity to the kitchen.

Did you work at any restaurants in the off seasons?

I’ve worked at a few different places in Missoula (where I went to college), most notably Plunk, Top Hat and Paws Up, an outdoor excursion type of resort north of Missoula that draws a big international crowd. I learned a lot of French technique there under the head chef Ben Jones: how important the size of the meat cut is, when you need high heat, when you need slow and low heat, how temperamental cream and oil are, how to balance salty and acidic, spicy and sweet, aromatic and savory. I learned so much about when and why things work together and how to extract the most flavor and texture from different foods. 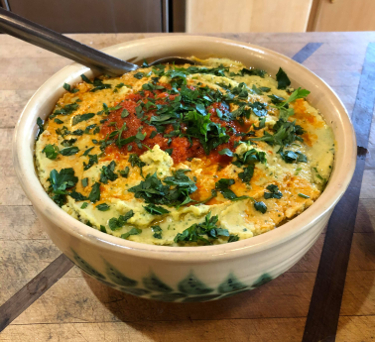 I also had quite a bit of authority at Top Hat, which is where I worked most recently before this summer. It’s a super high-volume kitchen serving hundreds of people each day, and it’s what we call a “scratch kitchen,” using little-to-no processed ingredients—nothing from concentrate, nothing prefab. The only thing in the entire kitchen that was premade were the hamburger buns. We made our own mayonnaise, pasta, pickles, everything.

We also offered a New Year’s Resolution menu every year that went into effect January 1st. The kitchen staff were kind of racking their brains, and I said that I’d like to run a Thai steak salad with fish sauce, lime and honey instead of brown sugar. They were very grateful because the head chef and sous chef felt like they had exhausted their ideas for paleo, keto and allergy-friendly dishes that fit into the Resolution theme. I have a lot of experience catering to different dietary needs from all the summers in the kitchen at the Ranch, so it was helpful to be able to bring that knowledge with me wherever I go.

For me, it comes down to creativity and my need to break out of the same old menus. I love to switch things up, even if it’s just subbing a few ingredients to put a different flare on a classic dish.

How does that play out at the Ranch this year? You have a lot of creative authority now. 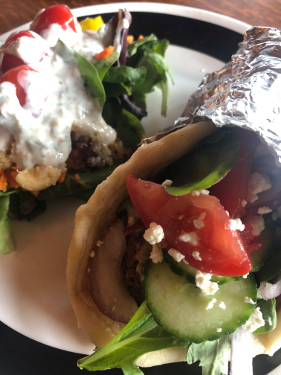 Yeah, it’s so fun to be able to fulfill my visions in the kitchen this year. When Crystal told me about their goal to get as much organic, locally-sourced produce as possible, I got really excited because it put me back in that “from-scratch” mode that I thrive in. Seasonal cooking requires creativity and resourcefulness because not everything you want will always be available. Making menus based on what’s ripe and ready is much different than making menus with the mindset that you can get whatever you need shipped from across the world.

We began the process of finding our distributors in early May, and our new menus highlight foods from a lot of local and regional farms: XX Bar Ranch in the Helena Valley supplies all of our eggs, pork and beef; Lifeline Organic Milk over in Victor supplies our dairy and we use their cow’s milk to make yogurt here in-house; Tucker Family Farms produces amazing sheep’s milk cheese; Timeless Seeds provides organic chickpeas, three different kinds of lentils and purple barley; Lowdown Farms; Sweet Root Farms; Western Montana Grower’s Cooperative; Charlie’s Produce—and a handful of others!

What’s one dish that delivers a noticeable difference by using the fresher, locally-sourced ingredients?

To me, using the chickpeas from Timeless Seeds here in Montana makes a huge difference for Mediterranean night. We handmake our hummus and falafel from the dried chickpeas, and that’s something I am not willing to skimp on. Yes, it means I have to remember to soak the chickpeas for 12 hours the night before, but the fresh falafel versus falafel from a premade mix—there’s no comparison!

We’re also making naan bread on Indian night using organic flour from Montana Flour and Grains, our homemade yogurt and extra virgin olive oil. The yogurt is actually what scorches and burns and brings that char flavor to the fresh naan. It’s truly a labor of love—it takes a while to make—but it’s worth it because Indian food isn’t complete without fresh naan, in my opinion.

Oh, and homemade pita bread is also part of Mediterranean night now too. Using local grains and making these breads from scratch has really added a new level to our meals.

I know that delicious dishes that cater to common dietary preferences and allergies is something you pay close attention to. What are some new options in this arena? 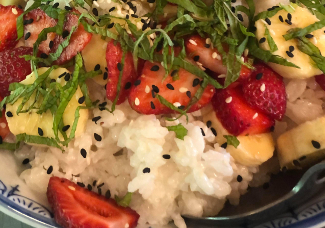 We’ve really leaned towards creating meals that fit most dietary preferences, which not only makes it easier for the kitchen but also shows care for the guests. Some vegan guests have told me that they visit other retreat centers and their option is a salad or some veggies that have been thrown together without a true cohesive meal. Here, I love to be able to say, “Everything is for you,” on most nights, or at least give another amazing option. I’ve created a vegan sour cream for Mexican night, which is literally just slow roasted cauliflower pureed with lemon and water. It’s the perfect consistency and so good!

Linzie has gotten really good with vegan and gluten free desserts too—brownie-ish bites, tiramisu bars, cobbler—all delicious enough that those who don’t have those preferences can enjoy it as well, and nobody gets left out.

Where do you find your inspiration for your favorite dishes at the Ranch? 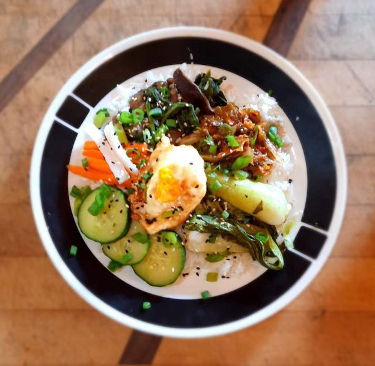 The Asian-inspired meals are, and have always been, my favorites. During my college years, I traveled to India, Thailand, Cambodia, Indonesia, Vietnam and Laos, which really deepened my love for Asian cooking. I’d talk to street food vendors or watch their techniques, how they used heat and cooked with the freshest ingredients. There aren’t even refrigerators, and they’re getting produce, meat and fish every single morning for that day’s food. I ask myself, “How can we move more towards that model—where we work with what’s available, choose the freshest foods and cook the correct amount so no leftovers are being thrown away?” Reducing waste is a big goal.

I cook things that I’m interested in trying, foods that I want to eat. I’ve always had a mature palette and that translates well to our clientele. I love being able to watch guests enjoy their food and also learn where it comes from.

What does it mean to you to be given this new opportunity as Culinary Director?

Well, it’s been a huge learning process for me as I get more comfortable with sourcing products in advance, receiving orders, keeping waste to a minimum and staying on top of the rotating menus. It feels amazing to have the authority to put that extra love and care into the food, though. To be able to say, “No, we’re not serving that from a jar; we’re going to make it from scratch.”

Adding to the weekly menus also makes me really happy—instead of 7 rotating dishes, we now have 14 rotating dishes. I know the food is a massive part of why guests love visiting the Ranch, and I want to make sure it’s something they talk about long after they leave.

We’re turning a page in the history of the Feathered Pipe, and it’s so cool to be a part of that. I’m given very little parameters on what I can do, and that freedom just feeds my creativity. It feels like we are steering the boat in a positive direction, one that aligns with the Ranch’s original mission—and I’m so happy to be here!