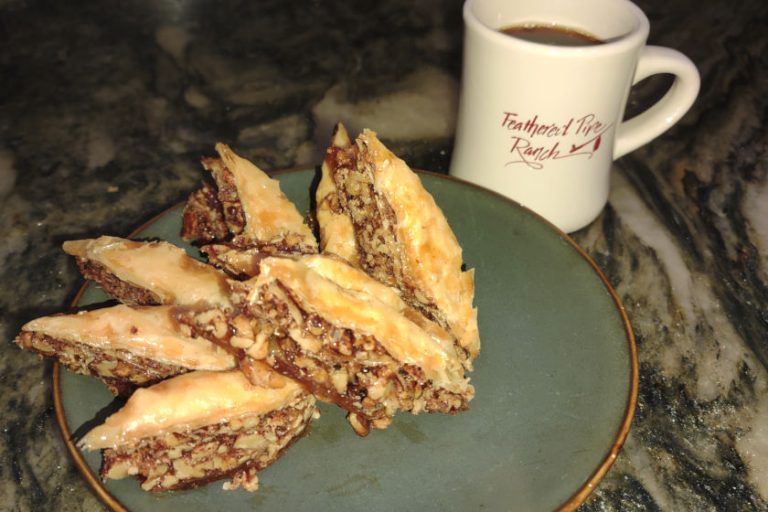 Baklava is a sweet pastry made by layering tissue-thin sheets of phyllo dough with butter, nuts, and spices. After baking, it is then topped with a flavored simple-syrup made with a base of either honey, sugar, or a bit of both. Baklava’s texture is dense but still crispy while in flavor it is decidedly sweet yet balanced by the savory found in the nuts, dough, and butter.

Baklava is made in a number of regional variations spread across the many cultures which surround the Mediterranean Sea. For instance, baklava made in Anatolia features pistachios and is often served with a bit of Turkish-style ice cream. Greek baklava, on the other hand, generally only uses walnuts and has more honey in the syrup.

The wholesome combination of honey, butter, unleavened bread, and nuts is an ancient one with mention of their consumption dating back to the Assyrian Empire. What is generally considered a “baklava” today was first mentioned historically in a 15th Century imperial cookbook from the Ottoman Empire. On the 15th day during the month of Ramadan the Sultan’s imperial kitchens would especially prepare and serve platters of baklava to elite members of his imperial house staff.

It takes a high degree of skill and considerable time to prepare stacks of razor-thin sheets of phyllo dough. Even today there are very few bakers who prepare phyllo dough manually. Here is a link to it being made by hand by a Greek gentleman and his family.

The baklava in this recipe is more reflective of the Greek variations of the dessert. It features walnuts and fresh ground cinnamon for the “stuffing” and a citrus and aromatic-spice infused syrup made from local Rocky Mountain honey and organic cane sugar.

Phyllo dough can be tricky to work with. It is very delicate and becomes brittle as it dries quickly when opened. Some tricks when handling phyllo dough are: Have everything ready to go for assembly before you open the package; Grab it from the corners and move slowly and gently when separating and moving the sheets into the pan; Cover the stack of phyllo dough sheets with a clean moist towel to help keep them from drying out. 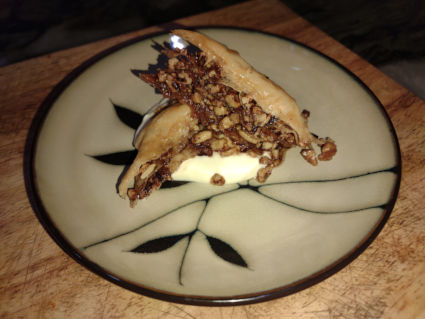 When cooking in the oven phyllo dough goes from being not-done to done rather quickly and should be watched closely as it approaches the end of its baking time. I used an 8″ x 14″ cast iron enamel-ware pan I have as it fits the width of the phyllo sheets almost exactly. Bear in mind that the cooking time in the procedure is reflective of that. If you use a lighter steel or aluminum pan to bake in it will cook more quickly. Cool, cover, and refrigerate overnight to properly set the dessert.

I, of course, couldn’t resist the fresh baked aroma and immediately had a piping hot slice of it on a plate with a spoonful of Greek yogurt! Nummy! 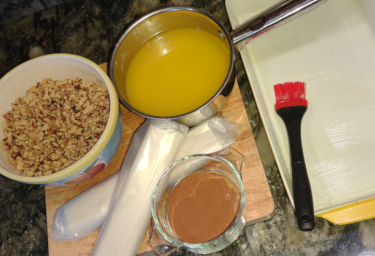 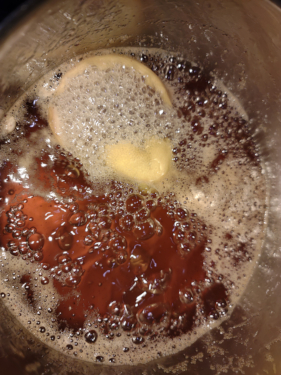 — Place all the syrup’s ingredients in a sauce pot and bring to a boil.
— Lower heat to a simmer and reduce by about a 1/3rd or so in volume. I check the consistency by filling a spoon of it and letting it cool for a few minutes on the counter. Should be a pretty stiff syrup when cool. Reserve on low heat when thick enough.

— Melt butter in a small saucepan.
— Brush/coat the bottom and sides of a baking dish.
— Coarse/pulse chop walnuts in food processor. Put the walnuts in a bowl and add a couple of tablespoons of melted butter and mix before adding the cinnamon. It will help the spice stick to the nuts better.
— Lay down one layer of the phyllo dough in the buttered pan and brush with a thin coating of melted butter. Keep layering the phyllo and butter for a total of 7 sheets.
— Sprinkle a thin layer of chopped walnuts and cinnamon sugar on top of the layered sheets. Layer 3 more sheets of phyllo dough and melted butter on top.
— Repeat step 5 three more times creating three sections of walnuts and cinnamon sugar.
— Layer 7 phyllo sheets with melted butter to make a top layer. Brush the top layer with melted butter. 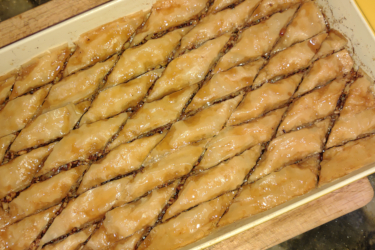 — Tightly wrap the pan in plastic and refrigerate for about 20 minutes.
— Unwrap, and using a sharp paring knife, score diamonds along the top through ¾ of the dough. Make cuts lengthwise of the pan and then diagonally width wise.
— Preheat oven to 350 degrees Fahrenheit. Bake until golden brown. About 35 minutes. Check frequently as phyllo burns quickly!
— Spoon the syrup evenly over the baklava when it comes out of the oven.
— Chill overnight. Slice through scores to serve.