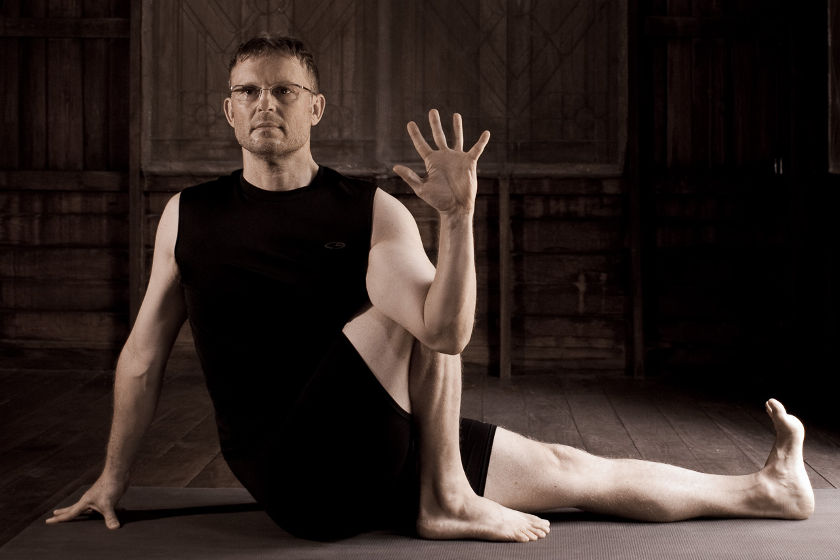 Spinal Health: Bringing Vitality Back to the Spine – Gernot Hubor

Back issues are one of the most common physical complaints people have. Learning to tune into spinal alignment, and learning to lengthen and compress your spine can do wonders for spinal health, both in the short and the long term.

One of the common causes of acute spinal trouble is over-compression of one edge of one of the discs between the vertebrae. This is especially common in the lumbar spine, and can lead to tears in the outer layer of the disc (the annulus fibrosus), or even to ruptures of the annulus. Minor ruptures or bulges can heal within weeks, but major ruptures (known as hernias or prolapses) can take months. If you keep re-injuring a herniated disc by perpetuating poor movement patterns, it can even become a chronic problem. (A herniated disc is also sometimes called a “slipped disc,” but this is a misnomer as the disc cannot slip because it is fused to the vertebrae above and below.) One of the main ways in which a herniated disc causes problems is that it can press on the adjacent nerve root exiting the spinal cord, causing nerve pain.

There is another emphasis we can add to spinal movement that is equally preventative and therapeutic. This involves alternately lengthening and compressing the spine. Over a lifetime, an even more common cause of spinal problems than disc rupture is degeneration of the intervertebral discs. This degeneration is easily measurable. As we grow older, we grow shorter as a result of the flattening of the discs and their loss of elasticity. (The other cause of growing shorter is an increase in the curves of the spine, also known as hyperkyphosis/head forward position.)

So how do we keep our discs healthy long term? Intervertebral discs contain living cells which maintain and repair the intricate extra-cellular connective-tissue matrix that makes up the discs. However, these living cells require an ongoing supply of nutrients and oxygen to do their work, as well as the removal of metabolic waste products. The discs lose their blood supply around the age of 25, and simple diffusion of materials in and out of the discs via the adjacent vertebrae is barely adequate. However, alternately compressing and extending the spine creates a pumping action that helps move nutrients into, and waste products out of, the discs.

While lengthening the spine is relatively simple and safe, how do you safely compress your intervertebral discs? After all, I just warned you about the dangers of spinal compression in the second paragraph. Nothing beats spinal twists for relatively safe compression of the discs, as in a twist the discs are evenly compressed front, back, and sides. This even compression avoids the potential for disc ruptures caused when only one side of a disc is compressed, as in forward bends. One additional word of caution: While twists are very good for spinal health, combining them with forward bends is actually more problematic than even extreme forward bends, so we will emphasize keeping our spines in their neutral S-curve when twisting, rather than collapsing into a forward bend, which is a common phenomenon in spinal twists.

I never say “straighten your spine” when I want a neutral spine, because a straight spine is NOT the same thing as the natural double S-curve of the spine. However, the one time that we do actually want to straighten the spine is in spinal twists. When we lengthen the spine we end up straightening it by necessity, and thus create two effects that aid safe twisting movements:

— The lengthening of the spine through the pressurization of the abdominal cavity reduces the internal pressure of the discs. This pressure reduction, in conjunction with the pressure increase during twisting, creates the pumping action that increases the nutrient exchange in the discs.
— The straightening of the spinal curves that accompanies the lengthening of the torso realigns all the intervertebral joints more closely to the plane in which the twist is happening. The more the discs are aligned with the plane of twisting, the more evenly the pressure created by the twist will be distributed throughout the discs, keeping them safe. 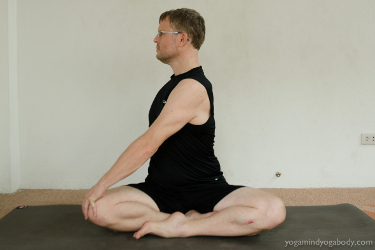 Come to a comfortable cross-legged seat on a cushion, block or chair, and lengthen your spine by letting the crown of the head float up. Inhale and allow your left arm to float up while engaging your deep core muscles (transversus abdominis and pelvic floor) to pressurize your abdominal cavity and thus lengthen the spine and flatten its natural S-curves. If you find this lengthening action difficult, you can aid it by pressing your right hand down in to the floor or another block by your side. The feeling of lengthening is that of the crown of your head floating up.

As you exhale, lower your left hand to the opposite knee. Do this by spiraling from the left hip up towards the right shoulder blade. With each subsequent inhale, re-lengthen the spine, making sure to reduce the forward bending that tends to happen when we sit. This is important to evenly distribute the compression to all parts of each disc.

With each subsequent exhale, deepen the twist, gently and evenly increasing compression. As you alternately compress and decompress the spine, visualize waste products being expelled from the discs during exhalation, and nutrients dispersing into the discs during inhalation. After 5-10 breaths, return to center on an inhale, and repeat on the other side.