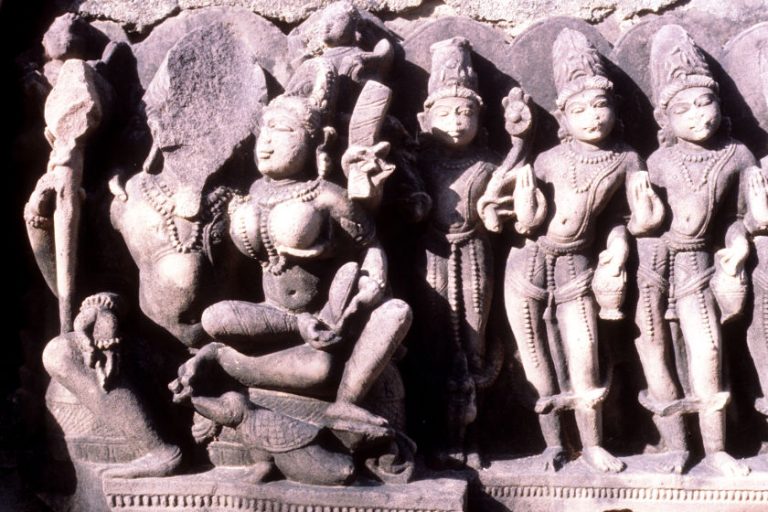 Self-Knowledge: the Act of Dying to One’s Self – Ravi Ravindra

“Whoever departs from this world without having realized their own inner world, to them life has been of no service;
it remains unlived, like the unrecited Vedas or any other undone deed.”

A great deal of emphasis has been placed by the traditions on self- knowledge, the kind of knowledge that transforms and heals the soul. The words written over the ancient library of Ozymandias, the king of Egypt, meant The Soul’s Cure.  Self-knowledge is a prerequisite to, if not synonymous with, knowledge of God.  According to Plutarch, the inscription at Delphi, ‘Know thyself’,  is an injunction addressed by God to all who approach Him. Human beings see “the nature of Brahman through the nature of their own self, as by a lamp,“ says Shvetashvatara Upanishad  (II.15).  Plotinus said, “Those  who seek to penetrate the nature of the Divine Mind must see deeply into the nature of their own souls, into the Divinest part of themselves.”

In fact, it appears that the only way to God is by self-knowing, dying to one’s superficial self and being born to a deeper self.   Clearly, there are differences in detail and emphasis, but there is no other point on which there is a greater unanimity of principle among the various masters of spiritual becoming. One of the non-canonical sayings of Jesus Christ is: “The Kingdom of heaven is within you and whosoever knoweth the self shall find it. And having found it, ye shall know yourselves that ye are the sons and heirs of the Father, the Almighty, and shall know yourselves that ye are in God, and God in you. And ye are the City of God.”

Obviously, there are levels of self-knowledge which correspond to a development of or to a deepening of being. Different traditions refer to these levels in many ways: as a seven-storied mountain, as rungs of a ladder, or as levels of consciousness. Within ourselves at the level of ordinary humanity, where we usually are, there is  confusion and chaos. We are like “a troubled sea, a sea that cannot rest, whose troubled waters cast up mud and filth” (Isaiah, 57:20).  We have conflicting desires and our compulsions are in constant flux; there is nothing abiding, nothing that could be properly called self.  As Pascal said, “We are naught but lies, duplicity, contradiction, and we hide and disguise ourselves from ourselves.”

Only deeper down is there the possibility of increased understanding, integration and wholeness.  Only in a state of collectedness, composure, openness, and alertness can we know anything objectively.  In all other states our perceiving apparatus is out of tune and it introduces its own noise arising out of the internal or external distractions and afflictions.  Nothing that we decipher in these dispersed states is ultimately trustworthy.  One of the purposes of the various spiritual schools is to help human beings repair themselves so that they may gradually come to a state of preparedness, freed of subjective desires, expectations, and fears.  As long as we keep making our little noises, we cannot truly hear.  Only when quietened within, may we encounter what is real.

In a purified and integrated state, arrived at after a long and arduous spiritual journey, we can discover our deepest self, which sages call by various names: ‘the spirit of the soul’ (Eckhart), ‘acumen mentis’ (Hugh of St. Victor), ‘center of the soul’ (St. Teresa of Avila), ‘spark of the soul’ (St. Jerome), ‘the divine person who is beyond the beyond’ (Mundaka Upanishad).  These are all attempts to name the nameless, but as Eckhart said: “The God who is without a name is inexpressible, and the soul in its ground is equally inexpressible, as He is inexpressible… To gauge the soul we must gauge it with God, for the ground of God and the ground of the soul are one and the same.”

Healing of the soul is both a finding of the soul and its refinement and right ordering, an attunement to what is subtle and real and on which the manifest world is evidently dependent.  Transformative self-knowledge is thus both a discovering and a sculpting of the soul.  Sages often declare such a soul to be eternal, always there from the beginning, but constantly threatened by fragmentation and perdition.  To say that human beings are made in the image of God is a statement of the Real, not of the actual.  For the actual to mirror the real needs work and spiritual discipline, a way, a yoga. In the process, the soul is healed as it finds its proper place in the Whole.

Healing of the soul quite naturally leads to the healing of our planet, in fact of the whole cosmos.  In the universal traditional idea of a correspondence between a human being and the cosmos, the microcosmos-macrocosmos homology, it can be easily forgotten that this correspondence does not apply to every human being.  It is only the fully developed person (mahapurusha) who is said to mirror the whole cosmos.  To become such a developed and whole person requires a transformation of the natural self.  Then we discover not only that we are one with the cosmos in its physical and biological materiality and lawfulness, but also that the cosmos is one with us and has many inner and spiritual aspects.

In our attempts to find objective knowledge, which is the great aspiration of science, we cannot eliminate the person or the soul.  What is needed in fact is an enlargement of the being of the person – freed from the merely personal and subjective.    In order to truly comprehend, one needs to be comprehensive.  This does not require a horizontal extension of more and more knowledge, but depends upon a vertical transformation which allows a participation in the universal being.  Such a transformed person is naturally inclusive and compassionate.

More and more, as one is freed with the aid of spiritual disciplines  from fear and self-importance, one can come to clearer and clearer perceptions – so that we can see things as they really are, things of time as subsets of eternity.  Such cleansed perceptions reveal objective reality – which surely includes not only what we can measure, but also that which can take the measure of our own being.  Such perceptions always carry a sense of universal significance derived from their participation in the Mystery.  An example from William Blake:

To see a World in a Grain of Sand
And a Heaven in a Wild Flower,
Hold Infinity in the palm of your hand
And Eternity in an hour.

The spiritual yoga – whether of the East or of the West, for Spirit by definition is non-sectarian and inclusive – aims at the realization of the transformed being, a Mahapurusha.  Such a person is deeply in accord with one’s own inner core as well as that of the cosmos, manifesting the First Person Universal.  Such a person loves what one knows.  Only such can know without opposition and separation, freed from any desire to control or to manipulate.  A person whose soul is healed, that is to say is whole, is naturally a sage.

Apart from the selflessness (and the accompanying absence of pride) and the natural feelings of compassion and love, which are characteristic of all the sages, there is one feature which needs to be underscored, and which is rarely remarked upon.  A sage simultaneously sees the oneness of all there is and the uniqueness of everything.  One cannot be unmindful of the seeming paradox implied here.

However, we are speaking about the experience of the sages and not about the limitations of our ordinary minds.  It is a fact of their existence and behaviour that, in relationship with others, the sages are aware that each human being is a manifestation of One Divine Energy, but that at the same time each person presents a unique potential (and corresponding particular difficulties) and is a wondrously unique expression of the Vastness.  Each person is related with the oneness, but no person is replaceable by another.  The One is unique in each manifestation. Everyone is seen by the sage as both one with the Source as well as uniquely oneself.

*Excerpt from Dr. Ravi Ravindra’s book Science and the Sacred

Ravi Ravindra was born in India and received his early education there. He went to Canada as a graduate student and later as an immigrant. Now he is a Professor Emeritus at Dalhousie University, in Halifax, Nova Scotia, where he served for many years as a professor in three Departments: Comparative Religion, Philosophy, and Physics. He was a Member of the Institute of Advanced Study in Princeton, a Fellow of the Indian Institute of Advanced Study in Shimla, and the Founding Director of the Threshold Award for Integrative Knowledge.

Dr. Ravindra’s spiritual search has led him to the teachings of J. Krishnamurti, G. Gurdjieff, Yoga, Zen, and a deep immersion in the mystical teachings of the Indian and Christian classical traditions. He is a prolific author including: Krishnamurti:Two Birds on One Tree, Science and The Sacred, The Wisdom of Patañjali’s Yoga Sutras and The Inner Journey-Myth, Psyche, and Spirit. These as well as Whispers from the Other Shore and many more can be found on his website: ravindra.ca