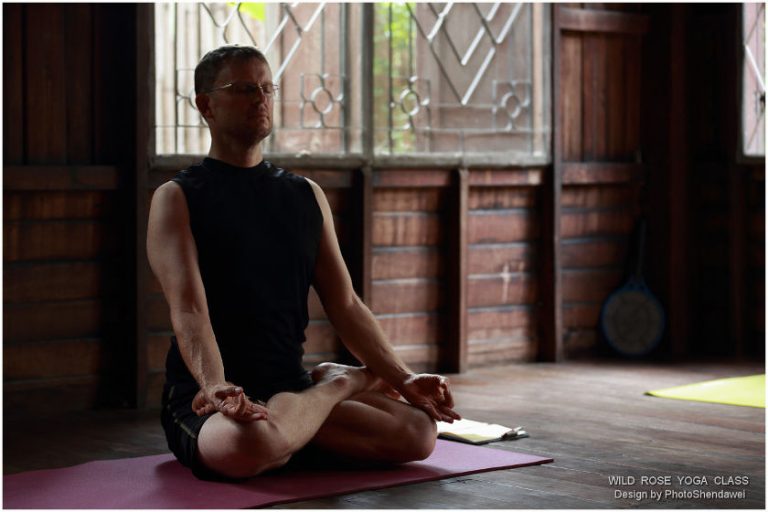 How can performing pranayama with an emphasis on control contribute to such mental conditions as anxiety? The explanation is that the breath lies at the intersection of body, conscious mind, and unconscious mind, and thus has a direct effect on all three.

To understand this connection a bit better, it helps to know a bit of anatomy and physiology. Breathing is a physical act brought about by the contraction of skeletal muscles (primarily the diaphragm). In general, skeletal muscles are under conscious control. The body has two other types of muscle, smooth muscle (in the walls of internal organs), and cardiac muscle (in the heart), which are under subconscious control. What makes the breath special is that when you don’t think about breathing, your breath and the contractions of the muscles that effect the breath are under subconscious control, despite the fact that they are skeletal muscles. The part of your nervous system that regulates your breath as well as the other body maintenance functions is called the autonomic nervous system (ANS), because it functions autonomously from the conscious mind. What is interesting about the breath is that you ARE able to influence your breathing consciously without much effort when you do remember your breath. (In contrast, influencing, for example, your heart rate consciously is quite challenging.) The ability to consciously influence the breath turns out to be the key to the power of the breath over the mind, because it allows us to use the breath to affect the unconscious mind.

How can we take advantage of this fact? Bear with me a bit longer. As part of its function of maintaining the body’s equilibrium (or homeostasis), the ANS is responsible for deciding when to up-regulate your nervous system (making you more alert, and in the extreme case triggering the stress response), and when to down-regulate (calming you, and in the extreme, triggering depression). What does this have to do with the breath? It turns out that the connection between the breath and the autonomic nervous system is a two-way connection: Not only does the ANS regulate the breath, but the way in which you breathe directs the ANS, either up-regulating or down-regulating your nervous system. Let that sink in for a minute. What this means is that through breath awareness and the conscious modification of the breath, you can use your body’s skeletal muscles to manipulate your autonomic nervous system, either increasing your alertness, or increasing relaxation, depending on your current needs.

How does that work in actuality? On the most basic level, a slower breath lower in the torso (i.e. a belly breath) has a down-regulating effect, while a faster breath higher in the torso has an up-regulating effect. A breath high up in the upper chest is called a paradoxical breath, because it makes no use of the diaphragm, the primary and most efficient muscle of the breath, and continuously triggers the stress response and thus literally poisons your system with stress hormones. (In case it isn’t obvious, breathing this way habitually is a very bad idea.)

There are a large number of specific breath exercises in yoga that either down- or up-regulate the nervous system, while some are specifically designed to create a sense of equilibrium between the two extremes (like Nadi Shodhana). But even the pranayama techniques that are specifically designed to up- or down-regulate do it in a moderated way so as to avoid the negative side-effects of going too far in either direction, avoiding the depressive side-effects of too much down-regulation, and the chronic stress symptoms of too much up-regulation (at least when done correctly) :). How does that work? The terms up- and down-regulation are convenient descriptive terms that are easy to understand and remember, but using these two terms gives the impression that we can only do one of these things at a time. The impression is that if we up-regulate, we can’t down-regulate, and vice versa. But the ANS has two separate branches, one of which is in charge of up-regulation (the sympathetic NS), while the other is responsible for down-regulation (the parasympathetic NS). Now both branches have an inhibiting effect on the other branch when they activate, meaning that typically up-regulation means a decrease in down-regulation, and vice versa. But if you look at the physiology of pranayama techniques you notice that they have the interesting effect of always balancing one with a bit of the other. Another way of saying this is that pranayama techniques appear to stimulate the sympathetic AND the parasympathetic NS at the same time. And this is not only something you can feel when you do them, it has also been documented in controlled scientific studies (see for example N.K. Subbalakshmi, et al. “Immediate effect of ‘nadi-shodhana pranayama’ on some selected parameters of cardiovascular, pulmonary, and higher functions of brain.” Thai J of Physiol Sciences. 2005 Aug;18(2):10-16.)

What’s truly remarkable is that the yogis that created these pranayama techniques were able to fine-tune them without an understanding of the underlying physiological connections, simply by experimenting and carefully observing the effects of their experiments, retaining the techniques that were beneficial, and presumably discarding others that were harmful.