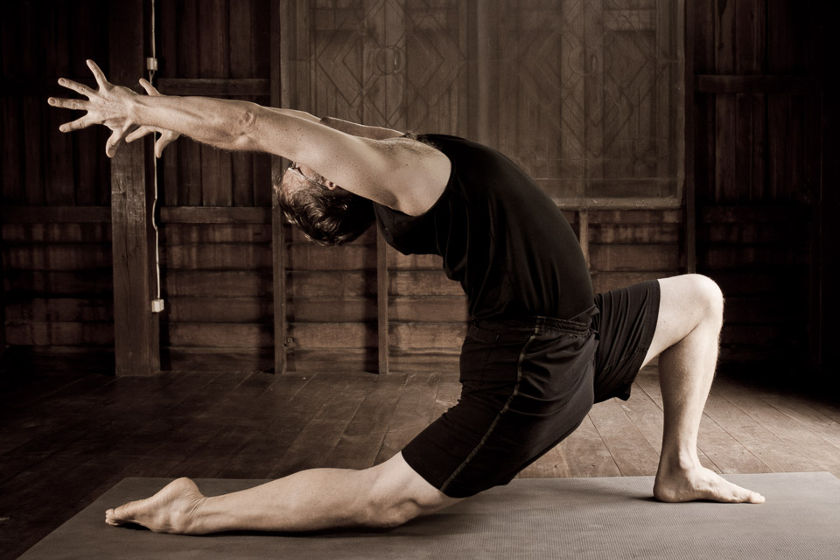 Our minds have the tendency to be overly reactive, to zero in on what appears to be the most pressing thing at any given moment, to the exclusion of everything else.

For survival in prehistoric times, such focused attention was probably a healthy response. But to live mindfully (and thus to maximize happiness), it is best to minimize this tendency, because being attention-driven and overly reactive keeps us in a state of perpetual low-level stress, always mindlessly reacting to the strongest stimulus. It doesn’t matter whether that stimulus is the cup of coffee you are craving, or the guy who just cut you off at the last intersection, or the deadline you have tomorrow. Being attention-driven and over-reacting to strong stimuli keeps us away from the here and now, from the authentic experience of our lives.

In yoga, the degeneration of awareness into overly focused attention manifests itself often as a fixation on whichever body part seems to be doing the most work at the moment, or is feeling the most uncomfortable. It also manifests itself as an over-focus on the front of the body (associated with individual consciousness), and a tendency to forget about the back body (linked to universal consciousness).

In yoga, allowing ourselves to be ruled by reactivity means we forget about the energetic shape of a pose and proper alignment as our mind tries to convince ourselves that we need to straighten that front leg NOW in Warrior II because the bent leg can’t support our weight any longer. Ironically, of course, being able to spread your awareness and focus on proper alignment and proper engagement in all the other body parts is exactly the solution to the front knee that is turning to jelly.

When we spread our awareness to the body parts that don’t seem to be crucial in any given pose, we discover how seemingly minor and usually forgotten alignment details can transform a pose, and—more crucially—can also transform your mental experience of that pose, that moment.

In this way, your yoga practice becomes a laboratory in which to practice reducing your reactivity. And with enough practice, your growing ability to be less reactive will spill over into the rest of your life.