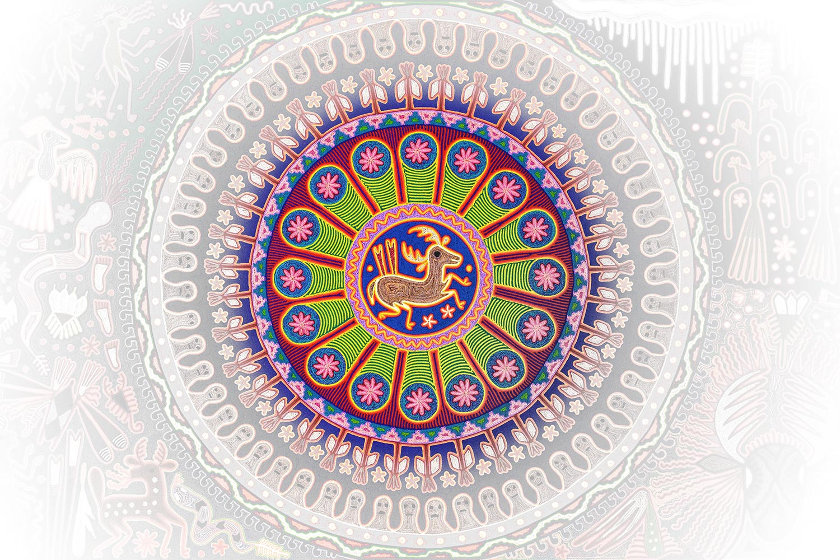 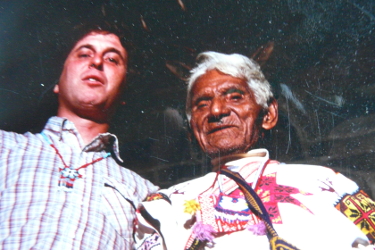 In 1970 at 18 years old, intrigued by a book of Carlos Castenada. I left my hometown in New Jersey and set out on a Journey to Ixtlan as a spiritual tourist in search of Don Juan. En route, I met a Huichol schoolteacher, who gave me the name of his family’s village – a 5 day walk away.

Soon, I found myself hiking through the Sierra Madre Mountains, in search of the mysterious Huichol Indians. With the sun blazing down on me, I followed a narrow deer trail hoping I was still headed in the right direction. The Mexican towns, along with the rest of the modern world quickly faded behind me.

The brazil trees and the thick underbrush enveloped me, as I continued deeper into the Sierra. After 3 days and no sign of any village, I found myself hopelessly lost. I had drank my last sip of water and tried to calm the panic rising inside of me. Pressing on in hope of finding the village, dehydration and sun exposure overtook me. The trees around me began spinning. I collapsed, sinking into unconsciousness, as feelings of disgust, anger and finally fear overtook me.

As I lay dying on the parched earth, I dreamt of circles full of light spinning in front of me. Visions of deer and an old indigenous man appeared. Suddenly, cold water hit my face. Startled into consciousness, my beautiful dreams and visions faded. Slowly opening my eyes, above me loomed the dark faces of three Indians. They told me in Spanish of an old shaman in their Huichol village who had dreamt I was dying at this spot and sent them to save me two days earlier.

Still weak, I was led through the mountains to a clearing with mud and stick huts, the smell of tortillas cooking and sounds of children playing. Amazed at this scene and that I was alive; I was taken to their shaman Don Juan (of the same name, but not the one of Castenada fame). I remained there for two weeks. The people told me of another shaman, Don José Matsuwa, in a nearby village who had also dreamt of me: He summoned me to his rancho. The same three Indians who had originally saved me led me to his hut.

Shortly after meeting Don José I was put in a cave for 5 days and 5 nights with no food or water. I was told this was my initiation. If I lived, I would continue as an apprentice to this renowned shaman and healer.

12 years later I completed my apprenticeship. I had been adopted as Don José’s grandson. He had taught me the ancient wisdom of healing and ceremony and we had become close companions on the path of the shaman. Following my training, I was sent back to the modern world, to help share the secrets of the Huichol, to heal those in need and to conduct ceremonies to bring balance to the Earth.

Since that time I have been traveling the world, striving to fulfill the vision on my teacher. Thousands of people have come to me for healing. From every corner of the globe and from all walks of life. Many of them have tried everything western medicine has to offer before finally resorting to shamanic healing. It seems to me that people today are more in need of healing than ever before.

Shamanic healing searches out the root of illness. Often a person’s ailment stems from something much deeper than what is felt on the surface. This is common with psychological and spiritual trauma, but also with physical ailments. The shaman strives to find the source of the illness and to extract it from the individual.

For many, shamanic healing may seem far-fetched or simply archaic; however, I have witnessed time and again its relevance for those very people who don’t even believe in it. I have had numerous people come to me after trying “everything else” and searching desperately for healing. One such man came to my office in Santa Cruz, California for a healing over 15 years ago. As soon as I met him, he asked if he needed to believe in the shamanic healing I was about to conduct. I said “no” and he replied, “Good, because I don’t.” His doctors had given him two weeks to live with his pancreatic cancer. He ended up in remission and lived another 10 years.

I am so grateful for my journey to the Huichol. I am thankful for the countless healings I witnessed while studying with Don José, which allowed me to believe. I remember one of the first things he told me. He said, “Until you learn to believe, you will never really learn.”

You can be told the earth is sacred or that shamans can dream of the future or heal terrible diseases, but until you experience it yourself, you can never fully believe. Experience is one of our greatest teachers.

Join Brant Secunda as he returns to the Feathered Pipe Ranch for a Summer Solstice celebration. Embrace the light of the summer season and learn ancient techniques to connect with the spiritual world of nature., June 19 – 26, 2021, “The Healing Way Of The Heart: A Summer Solstice Retreat.”

Brant Secunda is an internationally acclaimed shaman, healer, and teacher in the indigenous Huichol tradition of Mexico. During an intensive 12-year apprenticeship, Brant became the adopted grandson and close companion of Don José Matsuwa, the renowned shaman who passed away in 1990 at the age of 110. Brant was chosen by Don José to take his place in helping to carry on Huichol Shamanism. He founded the Dance of the Deer Foundation – Center for Shamanic Studies in 1979 and leads seminars, retreats, and pilgrimages worldwide. His work has been documented on television, radio, and in articles and books throughout the world.

To help provide sustainable cultural and economic support for the Huichol tribe, Brant founded the Huichol Foundation, which continues to expand upon his more than four decades of indigenous cultural preservation projects throughout the Sierra Madre.

Alongside other dignitaries including President Jimmy Carter, Brant cofounded the Peace University in Berlin and was also a co-founder of the Humanistic Medicine Conference with the World Health Organization. Recognized as a global thought leader and spiritual teacher, Brant has been a lecturer at the Mayo Clinic, the American Holistic Medical Association Conferences and a faculty member of the Five Branches Institute of Chinese Medicine.

Striving to bridge the worlds of fitness and spirituality, Brant co-authored the award-winning book Fit Soul, Fit Body: 9 Keys to a Healthier, Happier You.