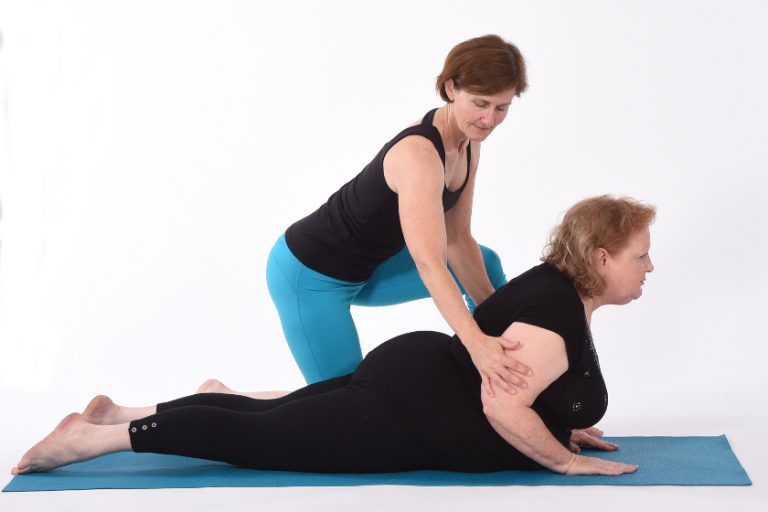 “Gentle Yoga” is for Everybody – Lanita Varshell

A beautiful larger woman, somewhere in her 50’s, walked into my center today with her friend. I could tell that she was apprehensive walking in the door, but when she saw me, a well-rounded 50 plus year-young teacher and the studio owner, she relaxed a little. The story she told me is similar what I have heard from hundreds of women in the last 15 years:

“I’ve always wanted to do yoga. I have never been athletic, never been coordinated or thin, but I did love moving and dancing when I was younger. Every time I saw yoga practiced, I loved the way it looked, but never knew if I could do it, and was afraid to try. My friends assured me I could if I found the right teacher and the right style, so finally, about 10 years ago, I got the courage to go to a class at a Women’s fitness center. The class was filled with fit looking women, and of course the teacher was a tiny little thin flexible woman. 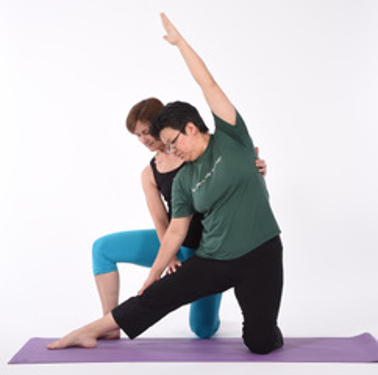 “I was concerned about the back issues I have, but the teacher assured me when I spoke to her about my concerns that I would be fine, and that she had worked with students like me, and had many years of training and experience. The class was intimidating and way too hard for me, even though the teacher came over and would help and adjust me. I left in pain, discouraged and depressed. I stayed in pain for weeks.

“I still did not want to give up, so I bought a series of yoga videos for beginners. Although the poses were slower moving than the class I had gone to, the teacher on videos was tall, thin, and could bend completely in half. My husband and I tried to do what she was doing, but we could never keep up. It went too fast, and we just did not ever feel like we were relaxed, stretched, or even knew what we were doing. Everything was awkward, uncomfortable, and intimidating. We gave up on the tapes, but I still didn’t want to give up on yoga. Something just draws me to it. Will someone like me ever be able to do yoga?”

The challenge with many forms of yoga, as well as much traditional exercise, is that they were created for the already fit and flexible body to STAY fit, or to get MORE flexible. When traditional yoga poses were recorded many years ago, they were taught primarily to men, who were lean and squatted on the floor as a regular part of their lifestyle. The poses were a way to prepare the fit body for meditation, and balance body, mind, and spirit energies. Traditional Hatha yogasanas (yoga poses) are extremely beneficial for an already active person or fairly healthy body, but what about a person who has not exercised for years? Someone who cannot even walk a ½ mile without great fatigue? Who cannot comfortably bend over, or even be on their knees?

The challenge with the way most yoga teachers are trained today is that they are trained to teach the traditional pose first, with modifications, if any, coming later. So when a plus size or health challenged student is in a class, there is an immediate feeling of discomfort, or defeat when they cannot do the pose the way it is originally demonstrated. A well-trained teacher will notice and offer alternatives or come over and prop the student into the pose, but by that time many students are self-conscious and embarrassed by the additional attention and sometimes already even injured.

Many women have told me their “horror stories” of yoga class experiences, and I myself as a plus-size woman in traditional classes have felt the embarrassment in my earlier years of yoga of not being able to do something. Having attention drawn to us is the last thing we want, but here would come the teacher, with five more blankets or 4 more blocks so that you can do what everyone else is doing without them. It seems as if all the “fit” people are watching you; a few with kind and understanding eyes applauding you for being there, but more with looks of impatience and annoyed that YOU are slowing down THEIR class. 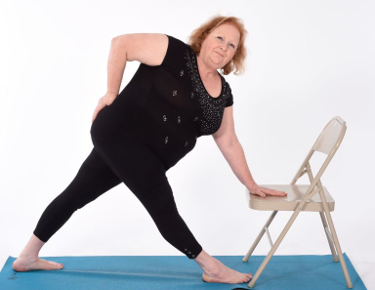 In 2001, Time Magazine helped to bring yoga and its many benefits to the attention of millions of readers. On their cover of their April issue they had actress Christy Turlington doing a complicated yoga pose. The cover read; “The Science of Yoga…. Millions of Americans are discovering this ancient exercise. Here’s the skinny on why it makes you feel so good.”

Near the end of their nine page extensive article on yoga, which covered Bikram’s Hot Yoga, the Sun Salutation, chakras, pictures of partner poses and pretzel poses that only a small percent of the population can do, there was this paragraph:

“Two oddities attend yoga’s vogue. One is that America has the fittest people in the world, and the most obese. Yoga, typically, is practiced by the fit. Exercise, the care and feeding of the body and possibly mind, is their second career. The folks in urgent need of yoga are the ones who are at the fast-food counter getting their fries super size; who would rather take a pill than devote a dozen hours a week to yoga; for whom meditation is staring glassily at six hours of football each Sunday; and who might go under the surgeon’s knife more readily than they would ingest anything more Indian than Tandoori Chicken.”

Over the past decade we are finally seeing books and articles about modifying yoga, but there is still much more attention that needs given to this issue. Sixty percent or more of our population is now overweight or facing serious illness, from Chronic Fatigue, Cancer, FMS, MS, crippling Arthritis, and many other illnesses, diseases, and health challenges. There are now MORE people suffering than healthy. Yoga and meditation are the greatest healing tools there are, but must be modified to meet the NEEDS of the individual, and for the greatest majority of our population cannot do what we have come to know as “traditional” yoga.

Because I came into yoga as a plus-size, health challenged student, I had to learn to modify poses so that my body could benefit from them, and I understand more about the awkwardness, pain and intimidation than someone who perhaps has never lived in a very large or health challenged body. As I have worked with thousands of other students who are older, larger, less-flexible, and more health-challenged, together we have learned even more modifications. Regardless of the type or amount of modification, the practice is still yoga, if it is done with the same intention. The results we have had with a gentle, modified approach to yoga have amazed even us! Doctors have told me that what I teach could be considered PRE-physical therapy. Therapists have said that it has elements of Feldenkrais, Accupressure, and Qigong, but it is YOGA, just adapted to each person’s abilities.

A Gentle Way yoga is about learning to teach from the lowest level of student in class up to the fittest ability. The wonderful surprise about this method is that it is also attracting fit students who need to learn to slow down and center themselves, who have back challenges, or who have injured themselves in other classes.

“Gentle Yoga” is for everybody. It is fun, doable and highly effective. If you consider yourself “fit,” it may even be the deepest yoga you will ever experience!

Lanita Varshell, YA ERYT500+, IAYT-Yoga Therapist, has been teaching Gentle-Classical Yoga full-time since 1996. She was featured in the 2000-Yoga Journal Magazine article: Why Yoga Works When Diets Fail, and was the first plus-size yoga instructor to teach at a Yoga Journal Conference (2002).  She has owned and operated A Gentle Way Yoga in San Diego, CA for over 20 years. Her students fondly know Lanita as the “Queen of relaxation and modifications.” She has helped thousands of “couch potatoes,” students with body issues, and chronic illness find a joyful, effective path to overall wellbeing, inner healing, and loving self-respect.