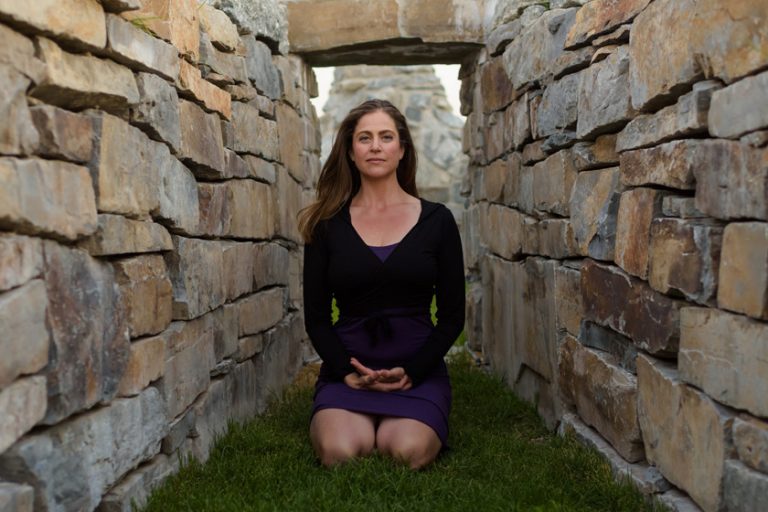 Hailing from Massachusetts, how did you come to teach yoga in this part of the country?

I’ve lived in Montana a few different times. The second time, I had moved back to Montana from New York City after completing my yoga teacher training, and the town’s only teacher at the time was about to leave. I had been teaching for a year at this point, and the woman basically handed the space over to me when she moved in 1998. A year after that, one of my students paid for me to open a yoga studio: Satsang Yoga Center. We built an incredibly beautiful space, and at the same time, it was a challenging and absorbing venture. After a few years, I became disillusioned by the politics of the yoga scene, and I wasn’t finding the mutual love and kindness that I’d hoped for and craved. I moved to Canada in 2003, and that’s when I met Donna Eden and began to learn about Energy Medicine. I always kept my personal yoga practice, but I needed to take a break from teaching for a while.

How did you know that you wanted to dive in deeper with Energy Medicine and Donna’s teachings?

Donna is a master, and her community was so open and generous and kind—they felt like family soon after I began studying with her. I took workshops, retreats, a certification program, and the work was just so immediate and powerful. Although yoga had helped me tremendously over the years, I had never felt like it alone could take me all the way through some of the emotional issues I was facing. Energy Medicine did, and the combination of the two modalities and practices really began to transform my life.

What were some of the changes you saw within yourself when you incorporated Energy Medicine into your personal yoga practice?

Energy speaks to everything: physical, mental, spiritual and emotional issues. I noticed that physical aches were resolving faster than before, and on a daily basis, I was more joyful, calm, centered and grounded—all things you can get from traditional yoga practice, in theory, yet I hadn’t found that to be lasting for me personally.

After I’d been working with Donna for a while, I went through a horrific experience that made me question my faith in humanity. The combination of EM and yoga helped me change my outlook from one of distrust and pain to joy and passion for life again. I was living, no longer just surviving—and I’ve seen this work do the same for so many others. Whether it’s a woman who has lost her sense of safety in the world due to assault, a young man preparing to go into war or someone searching for deeper connection to their own unique body, the results are profound.

Speaking of, you did have a teaching role with military students, right?

Yes, when I finally went back to teaching—at the request of my yoga teacher—I took a job at Norwich University, a military college in Vermont. The university was supporting research on yoga, meditation, prayer and other practices that were said to help with resiliency among members of the armed forces, so that’s where I really began to apply what I had been learning and experiencing.

I didn’t know it at the time, but I was teaching Energy Medicine Yoga, and my goal was to give these young people tools to keep them whole in the face of things that we don’t even want to imagine. The results from these classes were amazing and the students came to me all the time with feedback on how the practice was helping them in their lives. They were doing better on exams, forming healthier relationships, lowering stress and overall feeling more stable emotionally and mentally when gearing up to go to war all over the world.

The research from those four years at Norwich was the basis of my first book, Energy Medicine Yoga, and the motivation for me to bring these practices to a wider audience—including back to the yoga community.

Well, it looks like traditional yoga—with a twist. Poses are similar but we’ll do different holds, move limbs in a different way, massage a part of the body at a certain time. The physical movements are incredibly simple and totally accessible for anyone at any level of practice.

Energy is what forms our habits—smoking cigarettes, constantly picking a partner that is wrong for you, emotional eating, drinking, exercise habits. So in EMYoga, we uncover what you want to focus on then begin to create new language for the sensations you’re feeling. We’ll do journaling to help reprogram the mind and other techniques to get into your subconscious. From there, we use movement as well as energetic techniques to change the pattern that you’ve become accustomed to operating within. The techniques are the same for everyone, but since each person is working on their individual patterns, it’s like a code that’s specific to you.

That does sound like an Energy Medicine Yoga Prescription—an appropriate title for your second book!

Right! It’s amazing to watch the combination in action, and I truly love teaching it. In a recent training, a woman came up and said, “I have finally found a key to healing my trauma!” She had tried so many modalities, and up until now, nothing had been able to open the lock. I’m constantly hearing and experiencing miracles stories like this, and I’m so honored to be a forever student of Donna and her work. It’s not a miracle in terms of something happening outside of yourself—you are sparking the miraculous ability of your body to heal and thrive. It’s in every one of us.

*Special thanks to freelance writer and travel extraordinaire Andy Vantrease!