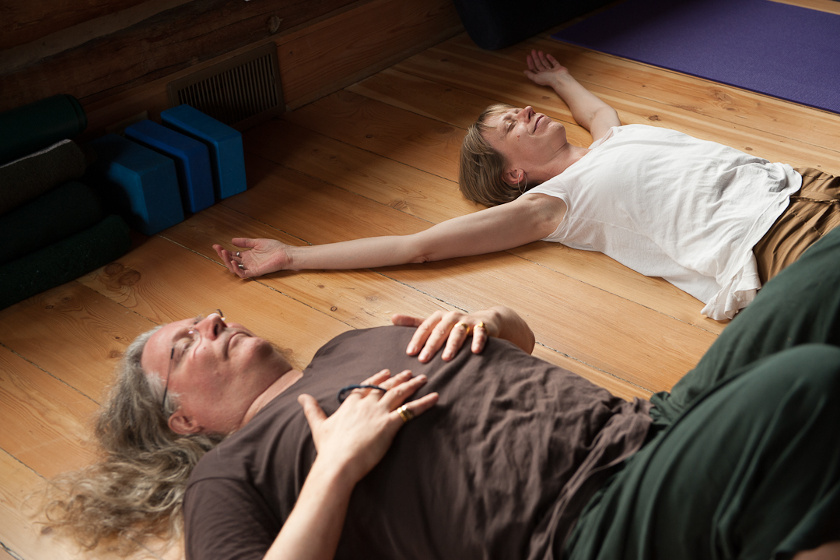 Yoga is a Sanskrit word that means “yoke,” and yoke means “union” and “joining.” This is a reference to our ever-existing connection with the creative God Force. Yoga as a practice is about making this personal connection a conscious feeling-reality fact. Allowing yourself to then be guided by this inner feeling-reality is the source of right action. Yoga, then, is about cultivating the consciousness of your personal connection with the All and of living your daily life with this awareness.

The interesting thing about the word yoga, however, is that union and joining do not mean the same thing. Union means oneness, wholeness, not separated or divided, indivisible. Joining means coming together, implying the formation of a union from a previous condition of separation. The implication here is that people who at one time felt separated, abandoned and alone, like strangers in a strange and hostile land, now feel connected, in harmony, safe and whole because of yoga. Yoga changes the way you feel, the way you look at things, and the way you interpret what’s going on.

Yoga, therefore, is a simple statement of a previously unrecognized but, nevertheless, already-existing union between each of us and all of nature and the universe. We are all a part of the Oneness, creations of a common Creator and parts of the same whole. We were never not a part of the whole, never at odds with the universe, and contrary to appearances there are no enemies. Therefore, we need not fear each other. We are the Universal Family born of the Father-Motherhood of God. This is what is meant by union.

Yoga is also a process by which you become aware of this ever-existing union. This is what is meant by joining.

This distinction is important because being “joined” and knowing you are joined is a different experiential reality from being joined and not knowing it. Being a part of All That Is but not knowing or feeling it is tantamount to not being joined.

You are already in union with the whole of creation, and you always have been. There is nothing you need to do in order to establish your personal connection. It is already so. But you may not have been aware of this. Not being aware of your ever-existing connection with the creative God Force—ignorance—is the root of fear.

“Joining,” therefore, can only be meaningful to a mind that perceives itself as separate. Since you are already joined and have always been an integral part of the whole, and have never been separate except in your imagination, then really there is no such thing as joining. No actual joining ever takes place. There is no need. There are no separate parts. But, insofar as you feel separate, there is a tremendous need. Joining, then, is nothing more, or less, than the clear recognition that you have never been apart.

The teachings of yoga, then, are designed to awaken you to the happy truth of your real identity. With this comes the release from fear and the subsequent inner relaxation that accompanies fearlessness.

This is interesting because you retain a sense of individuality, free will and “separateness.” But you now operate with the knowledge that you are connected to a larger thing, like players on the same team or cells in a body, and that “you” as an individual are an expression of that larger thing. There is no “you” apart from It. You are It in specific expression. Yoga, therefore, encourages a sense of “joining with” which results in an awareness of the already-existing “union.” When that happens you relax inside and start feeling good. You feel different about who you are—better.

Erich Schiffmann is one of the most respected mentors and yoga teachers in America. Having studied first-hand with Jiddu Krishnamurti, BKS Iyengar, TKV Desikachar, Dona Holleman, Vanda Scaravelli, Joel Kramer, Rajpur and others, he has gleaned the best of all of their teachings during his almost fifty years of practice and distilled them within his own experience of yoga. From that he arrived upon a path that has proven to have great resonance with those seeking a deeper sense of stillness, peace and being.

Feathered Pipe has been privileged beyond words to share space with him summer after summer at the Ranch. His teachings and his spirit inspire and enrich all. His wisdom continually validates that there are deep treasures to discovered in the search, and that to seek with curiosity, joy and sincerity is to find.